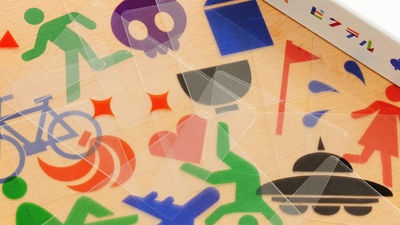 Pictogram ' is a mark that indicates information using simplified illustrations instead of letters, and is widely used in facilities such as stations and airports because it can convey its meaning intuitively. ' Pictel ' is a board game that conveys the theme by overlaying several transparent cards with such pictograms drawn.

Pictel is in a white box with a colorful logo. The number of players is 3 to 6, and the approximate time for one play is about 15 to 30 minutes, and the target age is 6 years or older. 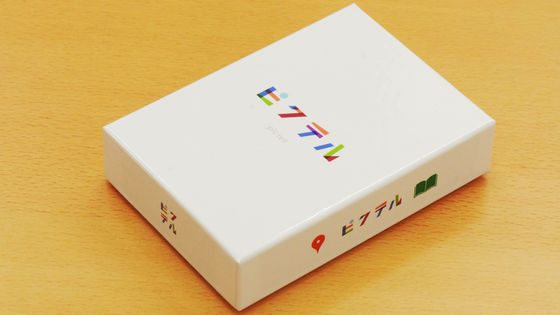 On the back of the box, there was a production example 'Rio Carnival' and a theme table. 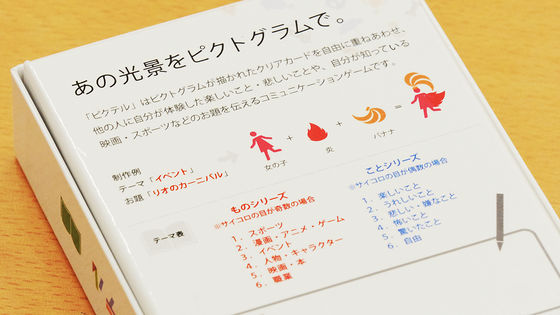 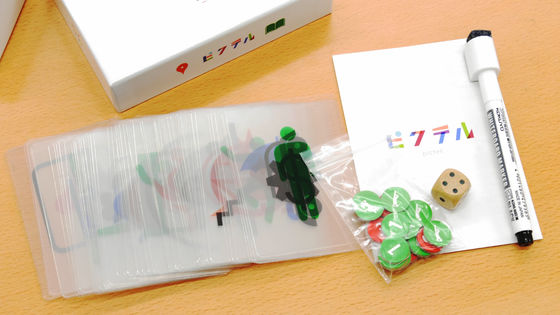 There are seven types of pictogram cards, in addition to the green running figure, which is familiar with the emergency exit mark, and the standing, sitting, raising hands, and moss scenes. 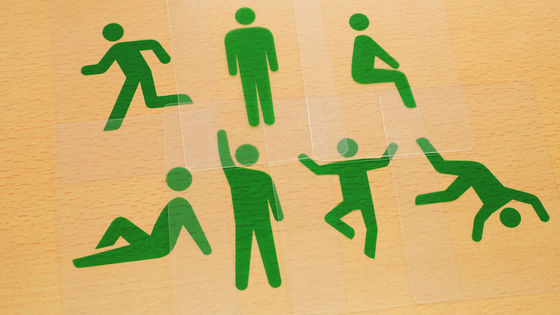 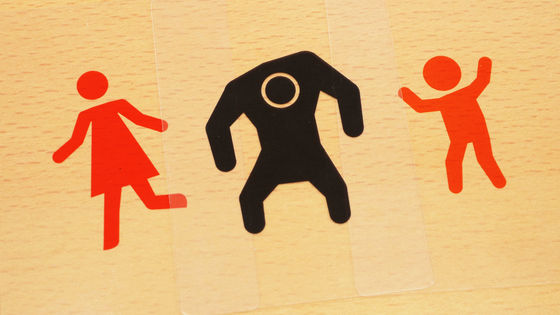 Vehicles such as bicycles, airplanes and UFOs ... 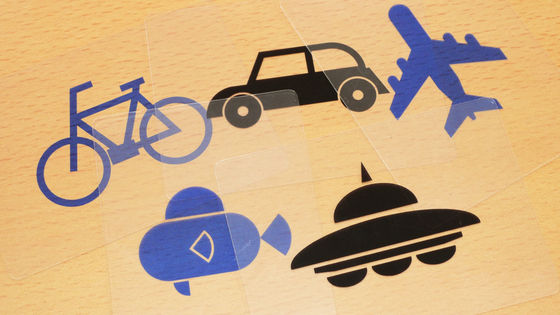 There are also icons such as circles, lightning, vortex, and smoke. 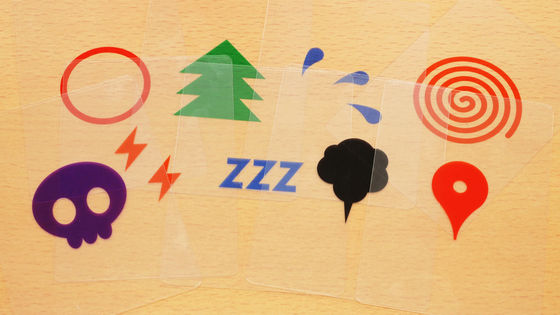 Pictogram cards are transparent, so you can create a pictogram according to your theme by stacking several cards as shown below. 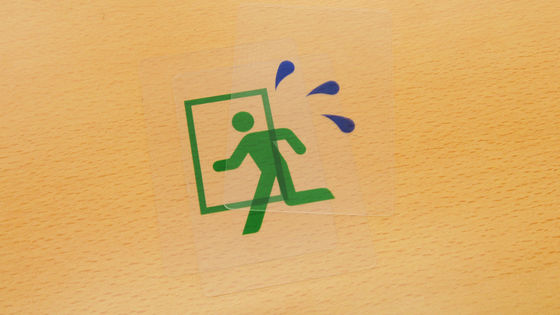 Circular scoring chips look like the following, '1 point' and '3 points'. Pictograms are printed on both sides. At the start of the game, arrange the cards in a circle so that you can see all pictogram card illustrations. The center of the circle is the “production area” where you create pictograms according to the theme, so leave the center wide open. 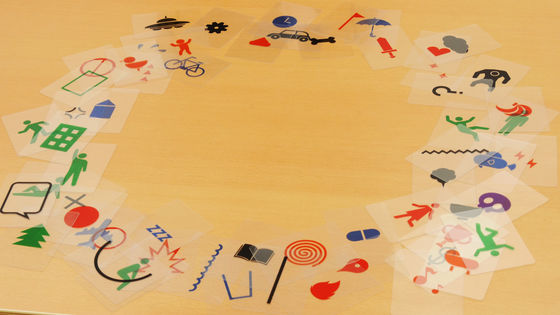 First, determine the quiz and creator, and the quiz rolls the dice twice. If the first die roll is an odd number, the subject series will be the 'Mono series', and if the number is even, the 'Koto series' will be. This time '5' appeared, so it was decided to 'Mono series'. After the series is decided, roll the dice again and decide the corresponding eye from the series table as 'theme'. Since the die roll was '2', the theme was decided on 'Manga / Anime / Game' from the 'Mono series'. 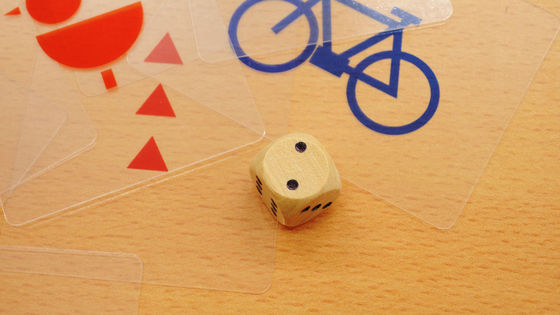 According to the theme, the questioner decides the theme and fills out the whiteboard space on the back of the box. After completing, the creator gives the box to the creator and tells the subject. 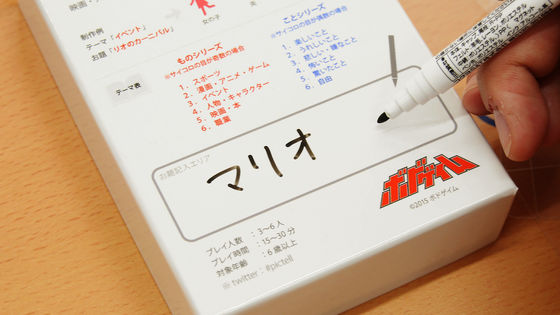 Next, the creator combines pictogram cards based on the theme. The rest of the players, except the creator and the quizzer, are respondents and think about what the pictogram represents. Respondents are OK no matter how many times they make mistakes, so use your imagination to read the pictogram. If the respondent gives a question, one point will be awarded to each questioner, creator, and correct answerer. 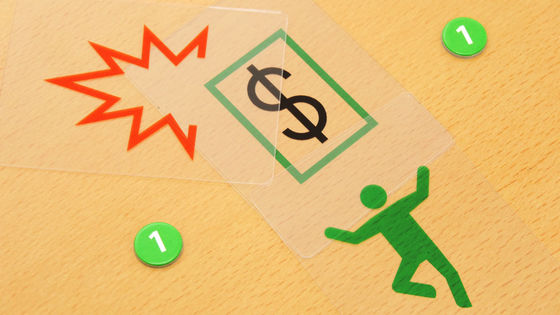 If no one can guess the pictogram created by the creator, the questions can be joined together to create a pictogram. If the correct answer is given after the subject has provided support, two points will be awarded to the creator and one point each to the creator and the respondent who answered correctly. 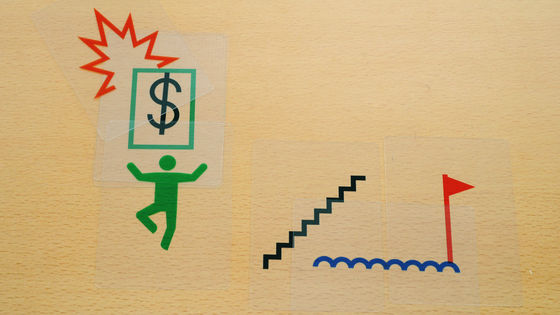 After the correct answer is given, the questioner and creator move to the player on the left. The game ends when the player reaches 6 points if there are 4 players or less, and 5 points if there are 5 players or more. When actually playing, it is difficult for the creator to combine a limited number of pictograms, and considerable imagination is required to make the pictogram as the theme. On the other hand, respondents were required to have the imagination to understand the meaning of simple pictograms. 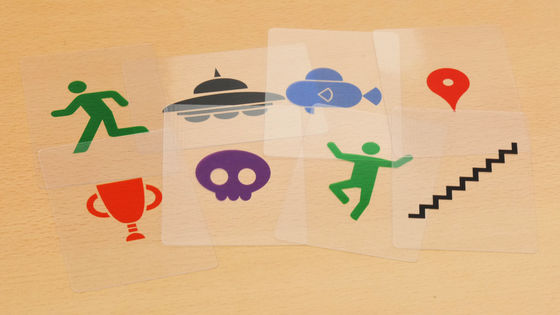 The price of 'Pictel' is 3500 yen including tax. Although it is available at board game shops, etc., it is out of stock at the time of article creation. In addition, Bodgeim, the developer of Pictel, has signed a license agreement with a French board game company, and it has been decided that Pictel will be sold worldwide under the name 'Imagine'.

Pictel has been licensed abroad with a French board game company and will be sold abroad as Imagine! In the future, it will be translated into multiple languages and components will be available worldwide. Nice to meet you! pic.twitter.com/v8r3Ma7fQq