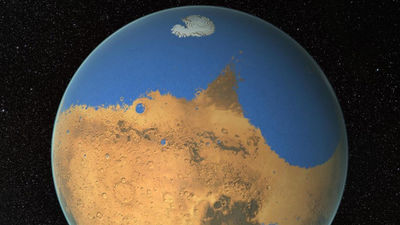 No life has been found so far because there is no moisture or oxygen in the atmosphere of Mars, where

a one-way migration plan is underway. Although Mars has such a harsh environment, NASA's research that a large amount of water that occupies about 20% of the earth's surface existed 4.5 billion years ago has been published in Science magazine .

NASA uses two types of water molecules on Mars, such as the 10-meter class 'Keck II Telescope' at the WM Keck Observatory , the 3-meter class ' NASA IRTF ' in Hawaii, and the ' European Southern Observatory ' in Chile. Analyzed with multiple large telescopes. As a result, it was possible to identify that a large amount of water existed on Mars 4.5 billion years ago.

By measuring the proportion of H2O and HDO containing deuterium, NASA Goddard Space Flight Center scientist Jeronimo Villanueva calculated how much water was lost from the atmosphere over time. 'Deuterium stays at the bottom of the atmosphere like water, but light water molecules have the property of rising like oil in water,' said Vila Nueva. By indexing, it was possible to calculate the amount of water that once existed. According to the research results of Mr. Villanueva, the water that existed at that time occupies about 20% of the surface of Mars with a diameter of 6779 km, and the water depth is comparable to that of the Mediterranean Sea (water depth 1500 m, deepest 5267 m). It would be nice to call it the 'Sea of Mars' if it is this big, but NASA describes this water as 'reservoirs' instead of 'sea' and 'lake' in its announcement.

Since there was enough water to cover the entire Mars, it is highly possible that organisms such as microorganisms existed or existed on Mars, but why did not so much water remain? It is a mystery. NASA has completed a device that measures the atmosphere from space, and plans to launch the new measuring device in the spring of 2016 for further investigation.