NASA announces that it finally found organic matter from Mars 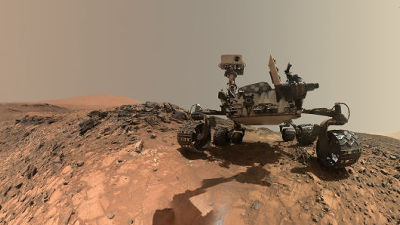 NASA which continued the investigation on Mars for more than 40 years, finally announced that organic matter was discovered from the soil collected from mudstone. Discovery of organic matter is not instantly linked to life forms, but it can be said to be a big step in life exploration.

According to NASA, the Mars probeCurio CityButGaleHe said that he found several organic matter from the soil mined from the mudstone in the crater called Crater. This mudstone is said to have been formed from the mud accumulated at the bottom of a lake that once existed near the surface of the earth over a period of about 3 billion years. The findings were announced at journal Science dated 8th June.

The discovered organic matter includes molecules such as carbon, hydrogen, oxygen, and nitrogen. Organic matter is generally related to living matter, but because it is sometimes made by non-biological processes, this discovery does not necessarily indicate that life existed. CuriCity is conducting a survey on Mars since 2012 and the research team in 2014We report the discovery of organochlorine compounds, It was impossible to exclude the possibility that the rover was a remnant when it existed on Earth.

NASA'sScience Mission DirectorateDeputy Secretary Thomas Zurbuchen said, "These new discoveries show that we should stay on Mars and continue researching for evidence of life existence." "The mission currently underway is on Mars I am convinced that if you do find a surprisingly surprising finish. "

Previous research shows that although the surface of Mars as of 2018 is desolated, the climate in the past is "water could exist". A few billion years ago from the data collected by Curio City, it was shown that there is a lake inside the Gael · Crater and that everything is necessary for the existence of life.

Also led the researchGoddard Space Flight CenterJen Eigenbrode of Mars "From 5 cm of the earth's surface on the Mars, it is a good sign that we can learn the story of molecular compounds on Mars and that the future of" to dig deeper " I am presenting a mission. "

In addition, researchers have published another paper based on Curiocity data. The second study showed that methane changed according to the season in the 3 years of Mars corresponding to the 6th year of the Earth. According to the data, methane will increase in summer in summer, and methane will decrease in spring and autumn. This methane may have been made from the scientific reaction of rock and water, but it seems that the possibility of being made by microorganisms that existed can not be denied.

NASA will launch a next-generation spacecraft "Mars 2020We plan to send Mars to Mars, but the results of the two surveys, increase and decrease of methane and organic matter discovery gave the scientists confidence in the future survey. Michael Meyer, who leads the NASA Mars exploration program, was asked about the existence of life on Mars, "I do not know if life exists, but the results of this survey indicate the direction we will conduct Mars exploration It shows that it is not mistaken. "