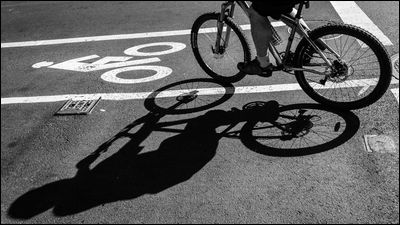 Bicycles are small and convenient, so it is a very convenient vehicle for small movements, but with the revision of the Road Traffic Law, in Japan, it is only on the left side of the road that you can ride bicycles freely. Even if you follow the rules, if you are on a narrow road, the feeling of distance with a car that passes by is too close and you are not comfortable, and there are surprisingly few places where you can run safely and safely. Under these circumstances, in New York, where bicycle lanes have been set up so that bicycles can run comfortably, not only bicycles become easier to ride but also bicycle-related traffic accidents are reduced and the traffic conditions of cars are improved. Studies have shown that it was a good thing. Since 2007, New York has 31 miles (approximately 50 kilometers) of bike lanes. The reason why New York set up a bike lane is simple, so that you can ride more comfortably in the urban areas. This dedicated lane is physically separated from the car by parked vehicles and curbs, making it easier for citizens to ride a bike.

When the New York City Transportation Bureau conducted a survey on this physically protected bike lane, there were many advantages to the lane other than the original purpose of having a bike ride comfortably in the urban area. I noticed that I was producing it. For example, on some roads in Manhattan, the installation of bicycle lanes has shown that the average speed of cars has increased, and the rate at which bicycle riders are injured due to traffic accidents is also decreasing. Yes, but how did the bike lane improve the traffic in New York? 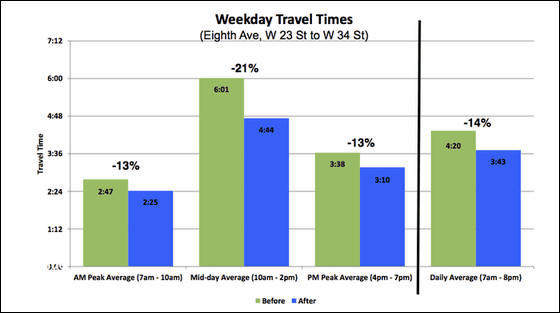 ◆ Why is the average speed of cars rising on some roads when a bicycle lane is installed?
When the New York Transportation Bureau conducted a traffic survey of Columbus Street, there was no significant change in the traffic volume of cars before and after the installation of the bicycle lane. However, the time it takes to go through this street has decreased by 35% since the dedicated lane was installed.

One of the reasons that the bicycle lane was able to improve the traffic conditions on Columbus Street is that when we set up the lane we did not 'remove one driving lane.' In order to create space for exclusive lanes, we usually cut one lane, but here we secured space for making bicycle lanes by narrowing each lane a little, so cars can pass Amount did not change. 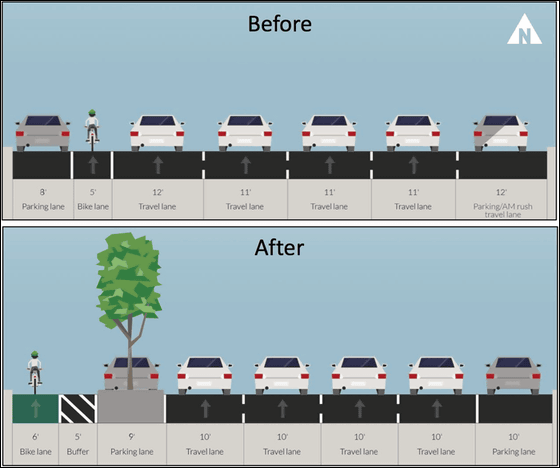 Furthermore, by making the parking lane into the lane for the left turn near the intersection, the car you want to turn left does not interfere with the traffic of the car going straight, so it seems that the car flows more efficiently through the road . ◆ Change in the number of traffic accidents by lane for exclusive use of bicycles
In New York, there are few contact accidents with bicycles going straight and cars turning left. This is because bicycles and cars are provided with separate direction signals, respectively. 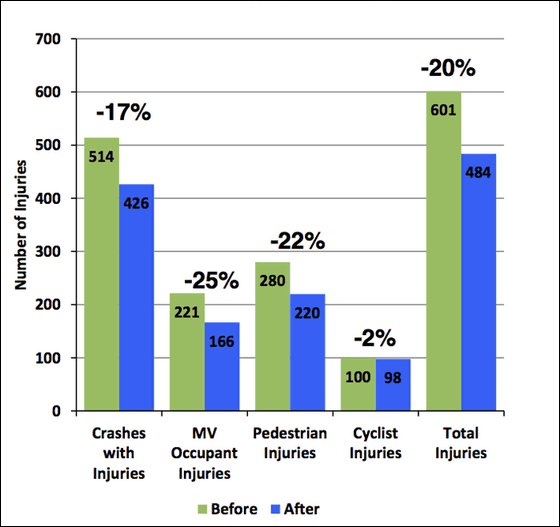 The figure below shows the risk of using bicycles in New York City calculated by the New York Transport Bureau. This is a graph that shows how much the chance of cyclists dying or getting seriously injured has changed, and some roads have risk less than half.

The findings suggest that installing a bike lane will not make driving a car inconvenient, but rather may improve traffic conditions on some roads.