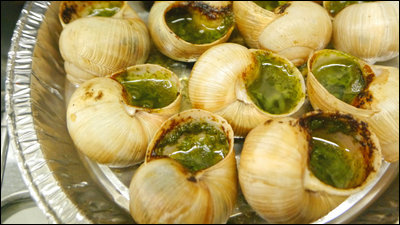 When I went to Costco to procure food to eat in the editorial department, I found frozen ' Escargo Inn Garlic Butter ' (2 packs 1198 yen including tax). It's seasoned with garlic butter, and it's shelled and looks gorgeous. I can't quite find it at a normal supermarket, so I decided to buy it and try it.

The package is written in French and the country of origin is also France. Raw materials look like this. In addition to butter and garlic, it is seasoned with parsley, salt, and red pepper. No need to thaw when cooking. When opened, the escargot shell is rumbling. There are 24 escargots in all, divided into 12 each. It's packed with green garlic butter, or 'escargot butter,' and looks like a lid. Garlic butter is packed tightly and you can see green parsley. With the buttered part facing up, set in a toaster oven and heat. Although there is a cooking method of heating for 10 minutes in an oven or toaster, it is raw even though it is frozen, so it is necessary to cook while checking whether it is sufficiently heated. Specifically, after various investigations, it seems that it is OK if both of the 'butter boils softly' and 'a little browning' are satisfied. Actually how much heating should be done, it will be completed if it becomes like the movie below.


done. If you feel uncomfortable with a slightly savory texture, heat it for about 20 minutes until the butter gets a little charred, and the heat will settle into your body. The texture differs depending on the individual, and there are some things that feel a little crunchy, but there is no particular effect on the taste. As for the taste, it does not have the odor of shellfish and other shellfish, and the garlic butter has a strong, thick flavor. It's better to taste the fragrant flavor of garlic butter with the texture of escargot, rather than the taste of escargot. If you are worried about the aftertaste of escargot, you can eat it with a lightly baked French bread like this and it will be like that with a garlic putter-like toast. Still, the escargot itself has a light aftertaste. If the thick fat of garlic butter remains in your mouth, it may be good to have some wine. In addition, if you spill garlic butter that has spilled or left in the container when you take out escargots and soak it in savory bread baked crispy, you can eat it without waste.