The upcoming titles announced include anime adaptation of Natsume Ono(Ristorante Paradiso)'s samurai manga House of Five Leaves, anime adaptation of Fuyumi Ono's vampire novel Corpse Demon starring Gackt as a voice actor, and even a live-action adaptation of Moyasimon: Tales of Agriculture, the first non-anime series to be aired in the block.

Read on for details and pics.
noitaminA
http://noitamina.tv/

"noitaminA" was launched in April, 2005 with the intention of expanding the target audience beyond the typical young male demographic. The timeslot is to be expanded from a half hour to a full hour in April 2010. Five titles to be aired in financial year 2010 (April, 2010 to March, 2011) was announced.

Saraiya Goyou(House of Five Leaves) will start airing on April 15. Set in Edo period, the twelve-episodes anime centers on a gang of mysterious outlaws called "Five Leaves". Produced by Manglobe of Samurai Champloo, Ergo Proxy and Michiko to Hatchin. 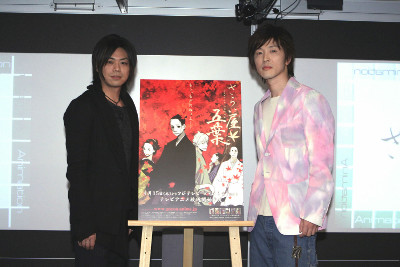 Yojo-Han Shinwa Taikei(lit. Cubbyhole Myths) will start on April 22. Based on a novel by Tomihiko Morimi, directed by Masaaki Yuasa of Mind Game, Kemonozume and Kaiba. 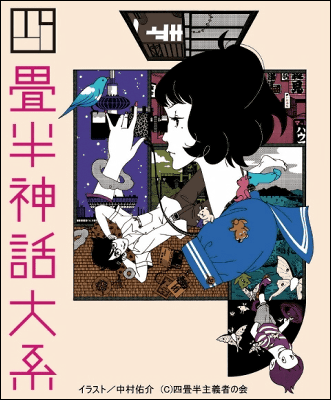 Live-action adaptation of Moyasimon will start in July. The award-winning manga by Masayuki Ishikawa was adapted to anime before in 2007, also aired in noitaminA block. 22-episode series Shiki(Corpse Demon) based on Fuyumi Ono's vampire novel and its manga adaptation by Ryu Fujisaki will start airing in July. Singer Gackt will voice the role of Seishiro Kirishiki, one of the major characters.