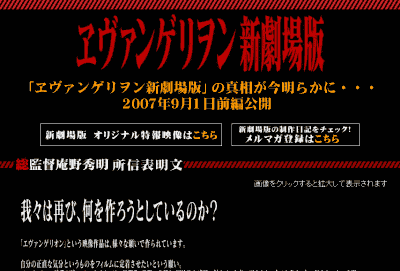 Neon Genesis Evangelion is `` Evangelion New Theatrical Version '', the first part will be released on September 1, 2007, and then it will be screened sequentially, such as the second part, the second part, the final part, but it is the director The full text of Tonobu's statement by Hideaki Anno and the original movie version of the new movie are Yahoo! It has been released today on the special site of.

Toshinobu's statement says, 'There has been no newer anime than Eva for the past 12 years,' which suggests many thoughts.

Details are below.
Yahoo! JAPAN-Evangelion Special

In addition, it seems that the same statement of this place statement is being watched out at 50 movie theaters nationwide. You can see the picture in the following article.

There is a production diary below, and an article has already arrived.

Evangelion at the time that was being broadcast on TV 12 years ago started watching from episode 7, and it was interesting so I borrowed a video from a friend who was watching and recording from the beginning and complemented from episode 1 to 6, and after that I really remember the last episode. Of course, I went to see the movie version, but this time, where and how to change ...

Speaking of which, what happened to the Hollywood version live-action Evangelion ...?