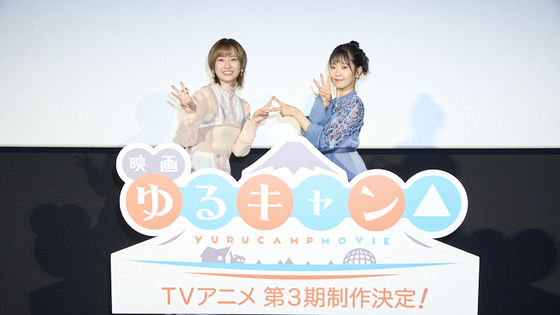 The production decision for the 3rd season of the anime ' Yuru Camp△ ', an 'outdoor girl story' centered on high school girls going camping, has been announced.

Thank you for the stage greeting of “ #Yurucamp △”!
It won't be long before we can see everyone at the cinema! Please enjoy it until the end????

And the 3rd season of 'Yuru Camp△' has been decided????✨
It's still a loose and warm day. May you continue to deliver a lot of excitement and healing! (Nao Higashiyama) pic.twitter.com/YTdvdcd8pt

The congratulatory illustrations and comments received from the original author Afro are as follows.

Thank you for confirming the 3rd season of Yurucamp.
I never thought I would be able to do the 1st, short, 2nd, and movie, and then the 3rd season.
I'm looking forward to the start of the broadcast because I heard that there is also a talk about my personal favorite Death Road this season. During the stage greeting, a video message from Tomoyo Kurosawa, who plays Ayano Toki, was shown.

Greetings from the cast at the end of the stage greeting are as follows.

Yumiri Hanamori:
I was talking about how it's already been five years since the dubbing of the anime, but somewhere I'm always in touch with Nadeshiko, and I feel that it's a role that will be close to my acting life. I hope that it will be a warm work that can stay close to everyone's lives for a long time. ”

Nao Higashiyama:
I think that the 3rd term is because I was loved by many people and was able to share my daily life. I am really happy to be able to go see new scenery. We are also doing new activities in collaborations such as mystery-solving games and apps, so I hope you enjoy it.