Twitter has announced that it has provided a function to edit tweets for members of the paid subscription service ' Twitter Blue '. The tweet editing function is available in Canada, Australia, and New Zealand at the time of article creation, and will soon be available in the United States.

Twitter's edit button is finally here — but probably not how you hoped
https://www.androidpolice.com/twitter-blue-editable-tweets-rollout/ 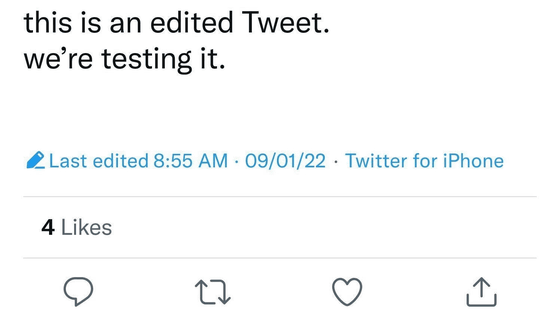 On October 3 of the same year, the official version of the tweet editing function was released for Twitter Blue users in Canada, Australia, and New Zealand.

Tweets that have been edited after posting are marked with a pen icon.

now that Edit is rolling out in Twitter Blue Labs, here's what you can expect

see that little icon? it's there to let you know that the Tweet has been edited pic.twitter.com/Av6vZYuVeO

plus, a version history is available on every edited Tweet so you know what changed pic.twitter.com/E3eZSj7NsL

According to TechCrunch, an IT news site, you can only edit a tweet within 30 minutes after posting. Furthermore, the number of times you can edit is limited to 5 times. According to TechCrunch, ``Twitter's restrictions on editing tweets are designed to allow users enough time to correct typos and add hashtags, while still allowing users to significantly alter their tweets and abuse the feature. It may be to prevent this,' he said.

In addition, since Twitter Blue itself is not provided in Japan, there is no plan to implement a tweet editing function at the time of article creation.