I have eaten the hearty 'Bacon Egg Sauce Katsu' that you can enjoy the classic breakfast 'Bacon &amp; Fried Egg' with the Sauce Katsu Don. Tonkatsu specialty store 'Katsuya' is offering a limited-time menu ' Bacon and Egg Sauce Cutlet ' from July 22, 2022 (Friday). It is a combo menu that combines bacon and fried egg, which are the standard breakfasts, with sauce cutlet bowl (ume), which is characterized by sourness and spiciness. I came to Katsuya. A poster was posted at the store to announce the appearance of bacon and egg sauce cutlet. I took a seat and ordered a bacon and egg sauce cutlet bowl. This was brought to my seat in about 5 minutes. A large fried egg sits in the center of the bowl. Bacon was laid under it. 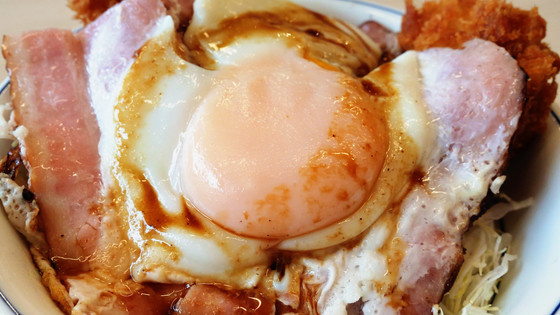 In addition, there is a sauce cutlet under the bacon. 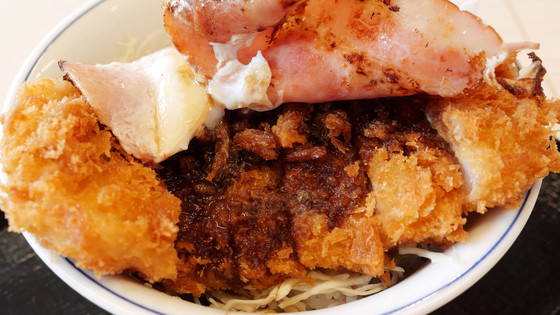 Below the cutlet was shredded cabbage, and below that was rice. It seems that the rice is soaked with the sauce hung from above. Since the sauce cutlet is freshly fried, the batter is crispy, and it is well seasoned with a sour and sweet sauce, so it has a sufficiently voluminous taste as a sauce cutlet bowl. The fried egg is a single-sided steamed based egg, and the yolk is half-boiled. When I poke it with chopsticks, the trolley and yolk spilled. When you eat rice with bacon sprinkled with egg yolk and shredded cabbage, it is completely different from the sauce cutlet bowl and has a completely breakfast taste. The salty taste of bacon is mellowed by egg yolks and crispy shredded cabbage. Also, since the sauce sprinkled from above is soaked in the rice, even if you eat the ingredients on top first, you will not be in trouble with the taste. The take-out menu comes with hot spring eggs instead of fried eggs. Basically, the take-out menu has the same taste, but since the fried egg has become an onsen tamago, the white meat of the egg has lost its elasticity, and I got the impression that the breakfast-like taste was a little lost. On the other hand, the thick white meat makes the taste more mellow, and it is easy to eat and has enough volume. This is a place where you can have a big taste, so if you want to eat it with a fried egg, try it at the store, and if you want to eat it with an onsen tamago, try it at a takeout.