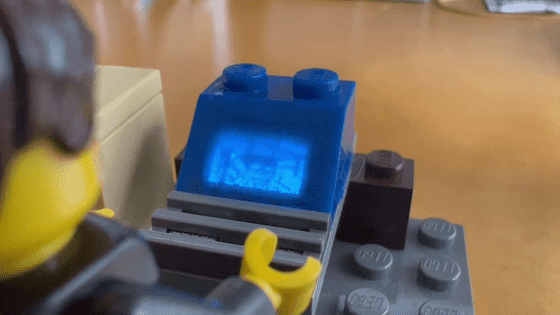 A person who succeeded in playing the popular FPS 'DOOM' released in 1995 using a liquid crystal monitor built into the block of 'Lego', which is synonymous with block toys, has appeared and has become a hot topic.

I wired the brick up as a very small external monitor, so you can, for instance, play Doom on it. Pic.twitter.com/uWK2Uw7Egr

It was James Brown, who lives in New Zealand, who remade Lego as a monitor. On June 7, 2022, Mr. Brown posted on Twitter how the Lego block functions as a monitor, and it attracted a lot of people's attention.

Very happy about this. pic.twitter.com/1FofmKbqJP

The Lego block modified by Mr. Brown contains the following board and ultra-small monitor ...

After that, Mr. Brown made further improvements to the first block he created ...

I haven't shared the schematic because it contains an error; you need to rework the boards to route a spare gpio to the screen. This involves drilling a 0.3mm hole through one of the pads, making a break in the ground plane, and soldering a little piece of wire through. Pic.twitter.com/hG5MfYq8N4

I created a block that is more opaque and looks closer to the blue color of Lego.

The new one is more opaque and a closer match to Lego Blue. I also painted the edges of the screen with black lacquer, which got rid of the glowing surround. It's a very fiddly construction. If I'm going to make more, I need to work on tooling. pic.twitter.com/2AEfSogIfU

In addition, the new block is equipped with a capacitive touch panel, which allows you to move the displayed image from side to side.

While that one cures, I added the trench run and got capacitive touch working in the studs. Pic.twitter.com/dxzEw2uDI9

In addition, the resolution of the monitor that Mr. Brown built in the Lego block is 72 × 40 pixels, and the number of colors is 1 bpp .