mousetrap ', tracking by police cars and police motorcycles, and speed violation automatic control device (Orbis) . 20's Plenty for Us , a non-profit organization that appeals for lowering the speed limit for people's safety, has released a smartphone application ' Speedcam Anywhere ' that can take pictures of driving cars and create evidence of speed violations. We have received various opinions from. 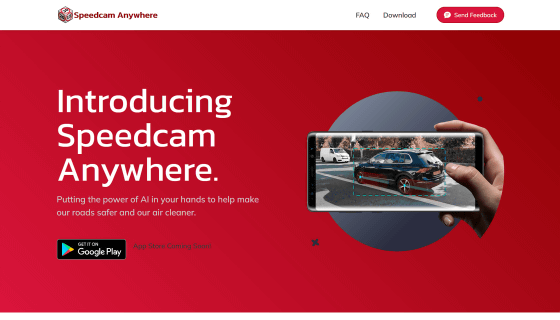 New smartphone app to gather evidence of speeding --20's Plenty for Us
https://www.20splenty.org/speedcamanywhere

Speedcam Anywhere is an application that can be used on smartphones and tablets. When you shoot a video of a car passing in front of you via an app installed on your device, the video will be uploaded to the cloud along with GPS information. After that, the cloud system can use AI to identify the wheelbase of the car and the point on the road, calculate the running speed of the car from the moving speed, and investigate the manufacturer, model, year of manufacture, etc. of the car. am.

In addition, the cloud system will automatically create an A4 size report that includes the video shooting location, vehicle photo, details, speed, and speed limit at that point, and users can download this report from the cloud and police. It is also said that it can be submitted as evidence of speed violation. 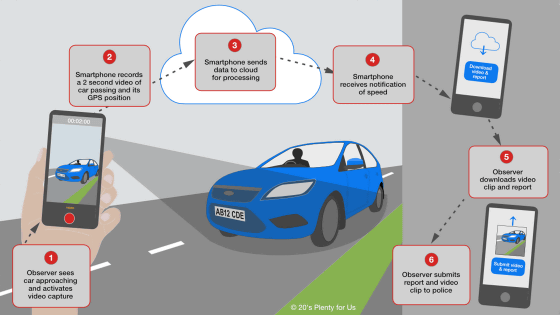 At the time of writing the article, the Android version of Speedcam Anywhere has been released only in the United Kingdom, and it is planned to release a version that will also work in the United States in the future. Rod King, founder and director of 20's Plenty for Us, said, 'This technology will crack down on speed limits by allowing communities and municipalities to provide clear evidence of careless and careless driving. It will make a big difference. '

In addition, Mr. King responds to supplementary information and other comments in the comment section of road.cc, a media for cyclists who reported on Speedcam Anywhere, according to which speed measurement based on video analysis is radar etc. It is said that it is excellent that the calibration required for the measurement device using is not required and that the police can refer to the video itself if necessary. 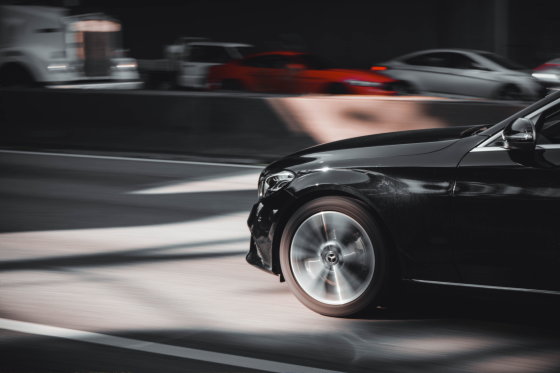 People are reacting differently in the comments section of the media, including road.cc, which covers Speedcam Anywhere.

The smartphone app that allows public to submit evidence of speeding drivers: will it actually work? | Road.cc
https://road.cc/content/news/smartphone-speeding-app-will-it-actually-work-291605

'This isn't a government-approved device, it's just someone selling it to make money.' 'It's a terrible abuse of digital technology.' 'Britain is becoming a country of tales.' 'This app will provide evidence that the police will determine that the speed has been violated.' 'Although it is unlikely to be legally accepted as evidence, gathering information about speeding vehicles will help. It may lead to a re-evaluation of the Road Traffic Act. '