Why does the predator tiger have a prominent appearance of 'orange and black stripes'? Animal colors and patterns have a variety of purposes, such as making them easier to find by peers and warning carnivores that they are poisonous. For animals that ambush and catch their prey, how they can be hidden from their prey should be important, but tigers have orange and black stripes that clearly stand out. Live Science, a science news site, explains why tigers look like this.

Why are tigers orange? | Live Science

Humans perceive colors because they can perceive three colors: blue, green, and red. Seeing an object means that the light that hits the object enters the eye and hits the retina at the back of the eyeball. The retina has rod somatic cells and cone somatic cells , of which blue, green, and red are perceived according to the pigment contained in the cone cells. It is said that only humans, apes, and some monkeys have the trichromacy that can perceive three colors in this way. 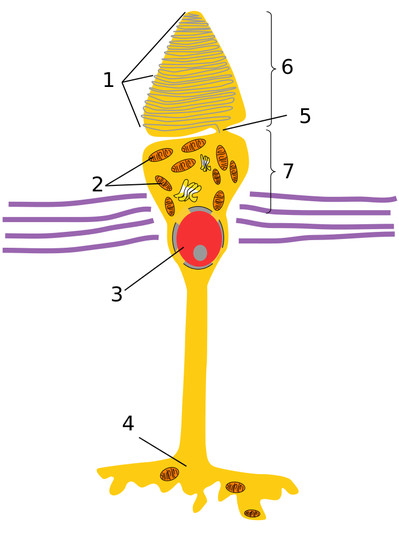 Most terrestrial mammals, such as dogs, cats, horses, and deer, are said to have dichromatism of blue and green because there are only cone cells that perceive blue and green on the retina. According to Live Science, the visibility of dogs and cats is close to being difficult to distinguish between red and green due to color blindness. Therefore, the orange color, which is the body color of the tiger, is difficult to distinguish from the green color when viewed from herbivores.

Then, when asked why tigers came to have orange fur instead of green, John Fennell, a lecturer at the University of Bristol Veterinary Medicine in the United Kingdom, said, 'In short, from the biomolecular structure of animals, It's easier to make brown or orange than to make green. ' According to Fennell, only sloths have a green body color in mammals, and the green color is not natural, but algae are breeding in the hair. In short, Fennell says that mammals with green fur do not exist in the world. 'It could have been possible for herbivores to improve visual perception as a survival strategy, but horses and deer were not under such evolutionary pressure. You wouldn't be aware that is orange, so there was no evolutionary competition for color vision. The tiger has only evolved to have a camouflage system in a jungle environment. ' I have commented.