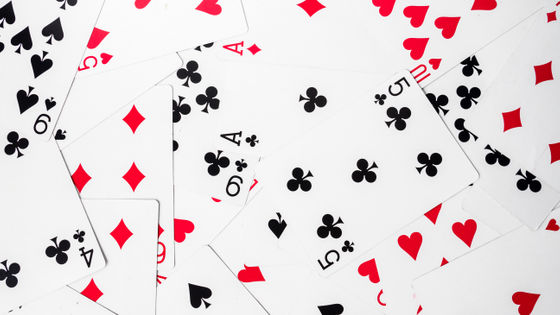 Artificial intelligence (AI) has beaten humans in analog games such as

Go and poker , and digital games such as battle simulation and Dota 2 , but it has been reported that they have defeated humans in the new card game 'Contract Bridge'. rice field.

Contract bridge is a game in which four players form a pair of two players and use 52 cards in four sets to accumulate points. There are two phases, 'auction' to set the goal of the game and 'play' to actually play the card.

This time, French startup NukkAI gathered eight contract bridge world champions to play against the in-house developed AI 'Nook'. In this match, the auction phase is omitted and the goal is set in advance. First, one human performs a 'dummy play' in which one person operates both his own hand and the hand of the person who makes his pair, against two other AI pair opponents, and then Nook plays against the exact same hand & the exact same enemy. A 'dummy play' was held to compete for which of the humans and Nook scored higher. AI that has been used in Go and chess so far makes decisions through machine learning from a large amount of data sets, and the thinking process is called 'black box' type AI that is unclear to humans. On the other hand, Nook is a 'white box' type AI whose thinking process is close to humans, and it is said that the method of learning the rules of the game first and improving by actually playing the game is adopted. am.

'This is a breakthrough in white-box AI and represents significant advances in cutting-edge AI systems,' said Stephen McGruton, a professor at Imperial College London, who was involved in Nook's research. We can expect to be active in other fields such as industry. ' Professor Michael Littman of Brown University, who is not involved in the research, welcomed the progress of white-box AI, but 'it is a pity that it did not include the auction phase that requires the most communication and bluffing in the contract bridge. 'It was made.

Nevena Senior, who actually played against Nook, said, 'The play phase is just as important as the auction phase. I was happy to be surprised that Nook imitated the skills of a well-experienced human being. Did a great job. '