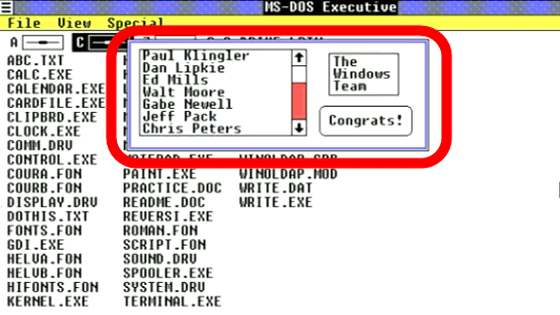 Software and games may have 'Easter eggs' that display a special screen when a specific operation is performed, as a playfulness for the developer. In March 2022, 'Easter egg listing developer names' was discovered in the Microsoft OS ' Windows 1.0 ' released in 1985.

Which version of @Windows is the first to include Easter eggs? Windows 3.0? Nope. What if I tell you there is an Easter egg in Windows 1.0 RTM? This is what I have recently discovered: pic.twitter.com/dbfcv4r7jj

The Windows 1.0 Easter egg discovered this time displays the following dialog. The left side of the dialog lists the names of Windows 1.0 developers, and the right side says 'The Windows Team' and 'Congrats!'. 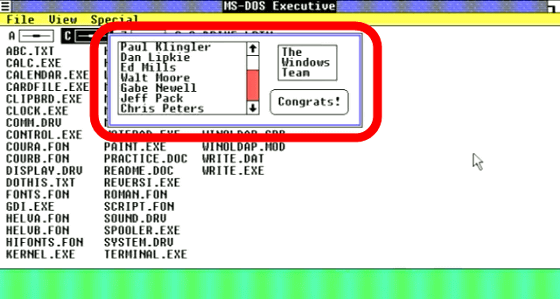 Among the listed developers is the name of Gabe Newell , who was with Microsoft at the time of Windows 1.0's launch and was Valve's CEO at the time of writing the article. 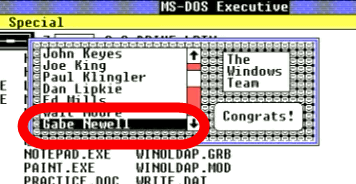 According to Lucas Brooks , the discoverer of the Easter egg, the Easter egg was placed encrypted at the end of the bitmap file. Brooks explains that Easter eggs weren't discovered until 2022, more than 30 years after their launch, because there was no bitmap file extraction tool at the time of Windows 1.0's launch.

As a result of Brooks' analysis of the successor OS ' Windows 2.0 ' of Windows 1.0, it was found that a similar Easter egg exists in Windows 2.0. As the number of developers has increased in Windows 2.0, the names of people displayed in dialogs have also increased significantly.

This thing made its way to Windows 2.x as well. Of course, the list got bigger. Also findows 1.xx ????. https://t.co/TGg4wYNvaJ pic.twitter.com/HNliGbA5dD