The Ukrainian government has started accepting donations in virtual currencies such as Bitcoin and Ethereum to fight the Russian army, more than 3 billion yen has gathered in an instant and it is further exploding On February 24, 2022, Russia declared war on Ukraine and began an invasion of the territory. Ukraine had opened a bank account for donations to seek help from all over the world, but as soon as it started accepting donations in virtual currency, which was initially refused, it was $ 17.2 million (about 1.98 billion yen). ) Donations have been reported. 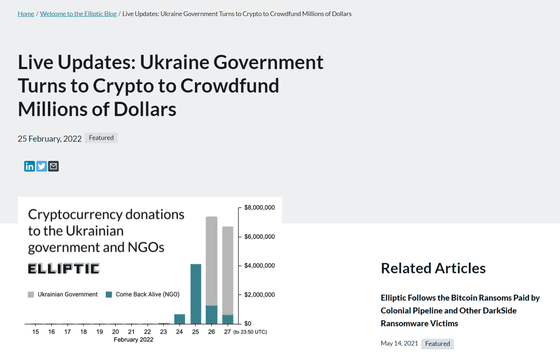 The Ukrainian government initially stated that 'donations of cryptocurrencies are not accepted for legal reasons', but the official Twitter account released the Bitcoin and Ethereum wallet addresses on February 27, 2022.

Alexandre Shelva, a former Ukrainian ambassador to Austria and diplomat, said, 'To those who want to help with Bitcoin. As shown in a tweet from the official account of the Ukrainian government, Bitcoin is officially legal in Ukraine. Don't worry about the comments. '

To those who want to help in bitcoin. Bitcoin is officially legit in Ukraine --just like this account and this retweet. Don't mind the comments of our Russian “brothers”. #StandWithUkraine https://t.co/d9Iv1nXGZv

According to blockchain analysis company Elliptic, shortly after the wallet address was released, at least 15,947 transactions raised $ 12.1 million in donations. Of this amount, $ 1.86 million is believed to have come from sales of NFTs sold to support Wikileaks founder Julian Assange.

Cryptocurrency donations are also accepted by Come Back Alive, an NGO that supports the Ukrainian army. Including donations to Come Back Alive, the total donation to Ukraine in virtual currency is 27.2 million dollars (about 3.1 billion yen).

Come Back Alive, which was established in 2014, originally received support from Patreon, a crowdfunding platform. However, Patreon has stopped accepting investment because 'funding to military organizations violates the policy' and deleted the Come Back Alive page. Due to such movements, it is thought that the means of donation are concentrated on virtual currencies.

On the removal of Come Back Alive | Patreon Blog
https://blog.patreon.com/on-the-removal-of-come-back-alive 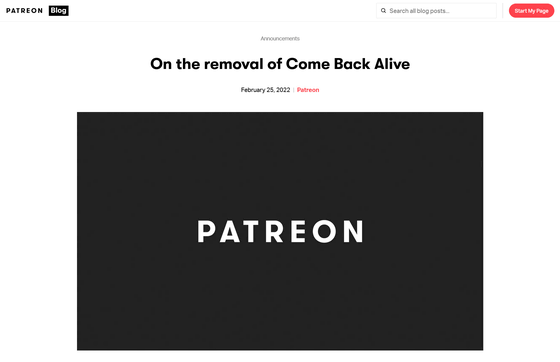