Twitter expands the inclusion of 'negative vote' buttons for tweets 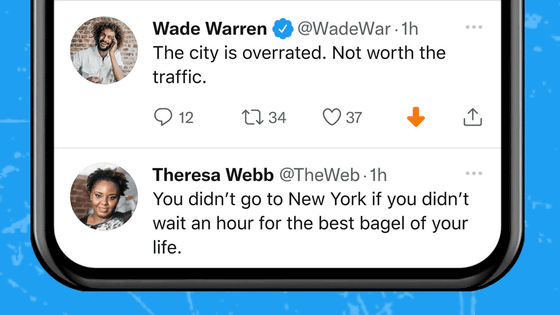 At the time of article creation, Twitter only has a 'Like' button to post a positive rating for a tweet, but a 'Negative vote' button for posting a negative rating against it has been quietly tested. , It turns out that this test will be extended to a wider range of users.

The 'Downvote' button, which Twitter is testing among some users, is a button that appears only in replies to tweets, and is said to be 'not related to tweets' or 'inappropriate replies'. It will be a button to press when you feel it. The user does not see how many negative votes have been collected.

We learned a lot about the types of replies you don't find relevant and we're expanding this test –– more of you on web and soon iOS and Android will have the option to use reply downvoting.

In addition, Twitter mentions this negative vote button as 'this is just a test for the research currently being done', and it can be seen that we are investigating how negative reactions affect Twitter. increase. In addition, it also states that the order of replies will not be changed by the negative vote button, and it is not a function to drive so-called fucking rips to a position that is difficult to see.

Foreign media Ars Technica said, 'The negative vote button is a double-edged sword. This will help you flag harmful replies that are unrelated or abusive to the conversation, but it also helps to suppress the conversation. I will. '

Facebook on the same social network tested the implementation of the 'Dislike!' Button, but immediately canceled it, and YouTube has been displaying high and low rating buttons together for a long time, Hiding how many low ratings are attached has revealed from experiments that the number of users who unnecessarily press low ratings has decreased, so the number of low ratings is no longer displayed .

Facebook is testing the implementation of the 'Dislike!' Button-GIGAZINE

In addition, Facebook has implemented a function to post the reaction of emoji, not a button to show negative intention like the 'Dislike!' Button. Initially, this emoji reaction was weighted up to five times more than 'likes' in the ranking algorithm, but the final result was that angry reactions to harmful content began to appear too often. Facebook has zero emoji reaction weights.