The number of people who lose their limbs due to illnesses such as diabetes and accidents is increasing year by year.For example, in the United States, it is estimated that 3.6 million people will be forced to lose their limbs by 2050 every year for some reason. Medical technology to regenerate lost limbs has not been realized. Meanwhile, a paper was published on January 26, 2022 that it was possible to regenerate the legs of a frog that could not regenerate its limbs. This has shown that even animals that cannot regenerate their limbs naturally may be able to exert their regenerative ability with appropriate treatment.

A small number of animals, such as the Axolotl, nicknamed the Woopaluper, can regenerate the missing limbs. The human body can also block cuts and regenerate even if half of the liver is lost, but it is impossible to regenerate complex organs such as limbs. When humans and most animals lose a part of their body, the lost organs do not grow from the wound because a mass of meat called scar tissue covers the wound to prevent bleeding and bacterial invasion. .. Therefore, the key to the realization of regenerative medicine is 'how to promote the regeneration of body tissue while preventing the wound from being covered with scar tissue'.

Therefore, research teams at Tufts University and Harvard University in the United States conducted an experiment in which the leg of Xenopus laevis was amputated and then the wound was covered with a container containing a gel-like drug. Xenopus laevis was chosen mainly because it has been widely used as a model organism for developmental biology. In addition, Xenopus laevis has the ability to regenerate a part of the body when it is a tadpole, but since it loses its regenerative ability at the same time as it metamorphoses into an adult, it is used for research on how to recover lost body tissue and function. Is also heavily used.

When the research team attached 'Biodome', a silicon cap containing silk protein gel containing five drugs that prevent growth hormone and scar tissue formation, to the wound of the amputated African Tsumegael, it was almost. A fully functional foot has been regenerated. 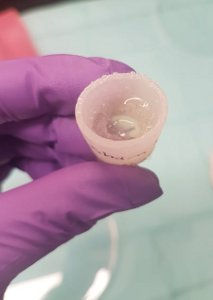 The new leg had bone with a structure similar to that of the original leg, and there was also internal tissue containing nerve cells. The regenerated foot responded to the stimulus touched by the object, and the Xenopus laevis was able to move its foot and swim in the water. It took 18 months to regenerate the foot, but I was wearing the biodome only 24 hours after amputation. 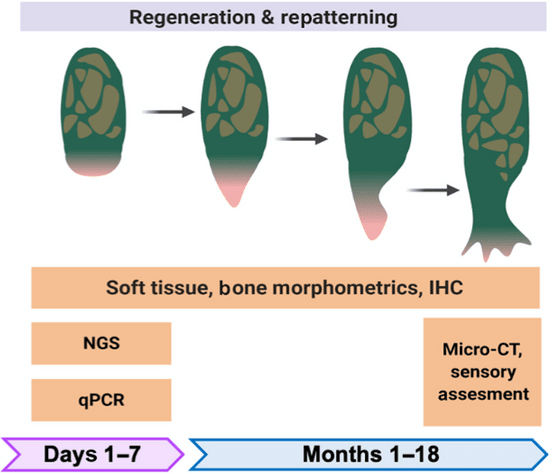 Regarding the results of this study, one of the co-authors of the paper, David Kaplan of Tufts University, said, 'By putting on the biodome for the first 24 hours, it reproduces the amniotic fluid-like environment and is not disturbed by scar tissue. We were able to proceed with the regeneration process. ' The lead author, Nirosha Mulgan, said, 'We are very pleased to see that the drug we chose helps to form a nearly complete limb. It also regenerates with a short dose of the drug. The fact that the process was initiated suggests that frogs and other animals may have the ability to regenerate in a dormant state. '