Macworld, a sister site of PC-related news site PCWorld, has

Core i9-12900HK, which is the top CPU for mobile of Intel's 12th generation Core series 'Alder Lake' , and M1 Pro / M1 Max , which is Apple's high-end SoC. We have published a comparative review.

First, the result of CPU test with Geekbench 5 is as follows. Comparing the scores, the Core i9-12900HK is about 3.5% higher on the single core (left) and 5% higher on the multi-core (right) than the M1 Max, but the score is almost a draw.

Next, the results of the OpenCL benchmark in Geekbench 5 are as follows. The NVIDIA GeForce RTX 3080 Ti score is almost 2.4 times the M1 Max, but the Core i9-12900HK's built-in Iris Xe graphics are a big difference between the M1 Max and the M1 Pro. As for the performance of the built-in GPU, it seems that M1 Max and M1 Pro still have a share. 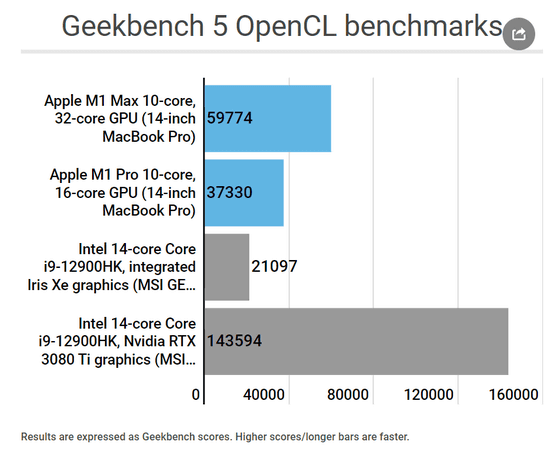 Next, the graph below compares the scores of CPU single-core and multi-core in

However, when Macworld measured the power consumption of the Core i9-12900HK during the multi-core test with this Cinebench Release 23, it consistently consumed around 100W, and occasionally spikes of 130W to 140W were seen.A review of the M1 Max in the same Cinebench Release 23 by tech news site AnandTech shows that the M1 Max is more power efficient, given that it consumes about 40W on average. .. Macworld said, 'The Intel Core i9-12900HK certainly has a benchmark score that surpasses the M1 Max. But there's one caveat to this win. One is power consumption and battery life. The MSI GE76 Raider is the top model in the 400,000 yen range. However, the MacBook Pro with M1 Pro is cheaper than the MSI GE76 Raider and shows almost the same performance. '