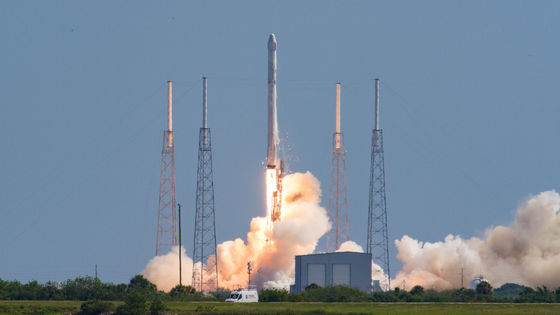 SpaceX, Elon Musk's space exploration startup, has repeatedly launched supplies into space using the reusable rocket Falcon 9 , and as of September 2021, 127 out of a total of 129 launches. Successful times. It has been reported that a part of SpaceX's Falcon 9 may become out of control and collide with the moon. Out-of-control SpaceX rocket will smash into the moon in weeks | Live Science
https://www.livescience.com/spacex-rocket-to-hit-moon

A SpaceX Falcon 9 rocket stage will slam into the moon on March 4 | Space
https://www.space.com/spacex-falcon-9-rocket-hit-moon-march-2022

Abandoned SpaceX Rocket Will Crash Into The Moon Within Weeks, Scientists Say
https://www.sciencealert.com/abandoned-spacex-rocket-will-crash-into-the-moon-within-weeks-scientists-say

In February 2015, SpaceX collaborated with the National Oceanic and Atmospheric Administration (NOAA) to launch a deep space satellite 'Deep Space Climate Observatory (DSCOVR)' for observing the weather, climate, and the earth in outer space. I used the reusable rocket Falcon 9. DSCOVR observes deep space from the Lagrange point , which is a 'gravity-stable position' about 930,000 miles (about 1.5 million km) from the earth toward the sun.

The Falcon 9 is a reusable rocket, but not all parts will be reusable, and some parts will be out of control and will drift in space as space debris. In the case of Falcon 9, the booster is a two-stage type, and the first stage can be collected and reused. It was predicted that the Falcon 9's second booster, which weighs 4.4 tons, would collide with the far side of the moon this time.

According to Bill Gray of Project Pluto, which develops software for tracking near-Earth objects, the Falcon 9 booster is flying in space at a tremendous speed of 9288 km / h on March 4, 2022. It will collide with the other side of the moon.

On January 21, 2022, Gray predicted on his blog that 'although we approached the moon on January 5, the actual collision will be on March 4.' 'As far as I know, this collision will be'the first unintended case of some rocket parts colliding with the moon',' he added.

In response to Gray's prediction, astronomer Jonathan McDowell said, 'Old Falcon 9 parts left in high orbit in 2015 are scheduled to collide with the moon on March 4. Interesting case, It doesn't have a big impact. '

For those asking: yes, an old Falcon 9 second stage left in high orbit in 2015 is going to hit the moon on March 4. It's interesting, but not a big deal.