Apple charges up to 30% on the purchase of game items and digital services through In App Purchase (IAP) in the App Store, an app store for iOS. In this system, which is also called 'Apple tax' and criticized, purchase of 'physical goods and services' such as vehicle dispatch service and delivery service is not subject to fees, but Apple will `` physical goods'' around 2018 An in-house email was posted on Twitter showing that it was planning to hit the top of Uber and Lyft, which provide such services, and it has become a hot topic.

Internal Tech Emails (@TechEmails), a Twitter account that posts internal tech company emails collected from public information, said on January 13, 2022, 'Apple executives collect sales commissions from ride-hailing and delivery services. I posted an in-house email stating that I was planning to deploy a subscription service with in-house billing. ' The series of in-house emails posted this time are included in a court document on the legal battle between Apple and Epic Games over in-app purchases, and are published as PDF by overseas media The Verge.

The best emails from the Apple vs. Epic trial
https://www.theverge.com/c/22611236/epic-v-apple-emails-project-liberty-app-store-schiller-sweeney-cook-jobs The content of the email tells Apple executives, Sherry Chan , then Business Leader of the App Store, that 'membership subscriptions will be a new source of revenue.' The email was dated June 2018 and addressed to Apple executive Eddy Cue , App Store vice president Matt Fisher , and current Apple fellow Phil Schiller. The names are lined up.

Uber and Lyft's ride-hailing services provide 'physical goods and services,' so even if you request a ride using the iOS app, Apple will not be able to collect fees through in-app purchases. However, by providing a 'service subscription service', you can also collect fees from these services. Chan also reported in an email that Uber and Lyft are considering introducing a subscription service in the near future. Mr. Chan noted that he had shared the idea with Mr. Schiller in advance, and Mr. Fisher and Mr. Kew also made positive comments in the email reply. After that, Chan et al. Meeting with an Uber representative in July 2018, 'Purchasing subscription services must use in-app purchases, in which case Apple will be charged a 30% fee.' I am reporting that I told you.

However, on October 30, 2018, Uber announced a subscription service 'Ride Pass' that eliminates price fluctuations without prior consultation with Apple. It's a system that doesn't use in-app purchases to buy subscriptions, and Apple has been overtaken by Uber. According to Apple's internal email reporting Uber's announcement, Uber officials claimed that 'this was decided as of 2017.' In addition, Mr. Chan who sent the email first seems to have retired from Apple at the time of Uber's announcement, and as of October 2018, he had changed jobs to YouTube.

Uber, a new service that guarantees a low-priced ride for about 1700 yen per month-in 5 cities in the US-CNET Japan

After that, it is unknown what kind of exchanges took place within Apple, but in December 2018, an email was sent saying 'I told Lyft that'in-app purchase is an option''. 'Unfortunately, the fact that in-app purchases are an'option'means that no one uses in-app purchases,' Fisher replied. 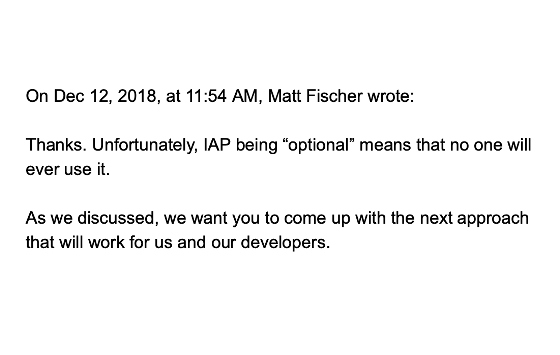 In Hacker News, an overseas bulletin board, this Twitter post has stimulated discussions, 'App Store fee 30% is too high' 'Given the advantages of the App Store, it is not possible to charge a 30% fee for the first app purchase Although it can be justified, it is impossible to impose 30% on continuous billing. '' The problem is that the App Store holds payment information and lowers the hurdles for purchasing and billing. '