Is it effective in enlightening activities to alert sharks not to eat? 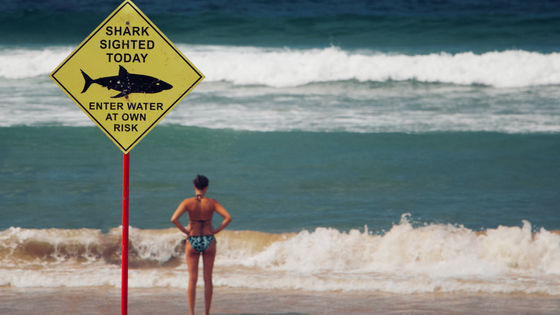 As it turns out that 'great white sharks are indistinguishable from the food seals and sea lions', you need to be careful about sharks when you go to the sea, but you will encounter shark attacks. Is a rare case , so even if you are told to be careful of sharks, the reality is that it doesn't come to your mind. Therefore, in Australia, an educational activity called 'Shark Smart Campaign ' is being carried out to control shark damage.

Shark bites are rare. Here are 8 things to avoid to make them even rarer
https://theconversation.com/shark-bites-are-rare-here-are-8-things-to-avoid-to-make-them-even-rarer-173746

Australia's Queensland Government, which is blessed with one of the world's leading marine resources and has a thriving tourism industry, is developing the 'Shark Smart Movement', which is an educational activity that summarizes lessons such as avoiding swimming at dawn and dusk when sharks are active. However, some tourists do not follow these calls. has the Great Barrier Reef, to launch the Shark Smart movement. We investigated the impact on tourist behavior.

Specifically, 'Show a short educational video to tourists going out to sea' 'Put a sticker on the boat that describes how to reduce the risk of encountering sharks' 'Distribute Shark Smart movement pamphlets to tourists' 'Food Awareness-raising activities were carried out by the method of 'distributing garbage bags for disposal.' Then, we observed the behavior of tourists with and without enlightenment and verified the effect of enlightenment.

The following eight 'behavioral patterns that increase the risk of accidents caused by sharks' were observed.
・ Raise the spray.
・ Swim alone.
・ Swim in places where shark accidents have occurred in the past.
・ Swim near the person who is catching the fish.
・ Catch fish near the person who is swimming.
・ Sprinkle bait.
・ Throw food into the sea.
・ Throw pieces of fish into the sea. Also, when we asked tourists, most of them 'avoid swimming at dawn or dusk', 'swim with other people', 'swim in clear water', 'garbage where people swim', etc. It was also found that they became aware of actions to avoid the risk of sharks, such as 'do not throw away sharks' and 'keep away from shark feeding fish and flock of birds jumping into the sea'.

In a survey conducted separately from this survey, 'Although 100% of tourists knew that garbage should not be dumped in the sea, about one-third dumped it in the sea. However, it is said that the percentage of people who throw garbage into the sea has decreased to about 4 to 8% due to educational activities.

Adam Smith, a marine scientist at James Cook University in Australia, commented on the findings: 'Thanks to the SharkSmart movement, tourists have stopped dumping garbage in the water and accidents have occurred in the past. The good news is that we're no longer close to the places we 've been to, but unfortunately some people who use the waterside still have the spirit of 'She'll be right ', which changes this consciousness. It will still take some time. '