What is the new mineral 'Dave Maoite' discovered in diamonds formed 660km underground? It was reported that a new mineral that had never been found was discovered inside a diamond excavated from Botswana in southern Africa. Mineral physicist is of Taiwan

Ho-Kwang Mao was named 'Deibumaoito' from the English name of Mr.

Below is a photo of the excavated diamond. 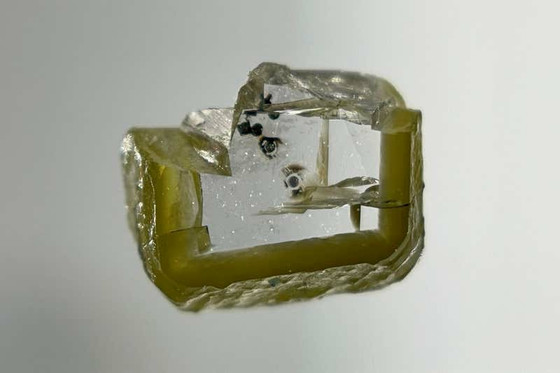 When the diamond was subjected to X-ray diffraction by a research team led by Oliver Chauner, who studies mineral physics and planetary science at the University of Nevada, small crystals of different minerals were found inside the diamond. In addition, Tschauner and his colleagues used a laser to cut diamonds and mass spectrometrically analyze the minerals inside.

As a result, it was found that the Normally, the perovskite structure seems to collapse when the pressure drops, but since the Dave Maoite discovered this time was trapped in a hard diamond for over 100 million years, it was possible to bring it to the ground without collapsing. .. When Mr. Tschauner and others cut the diamond, it maintained the structure for about 1 second, but after that, it expanded and it seems that the moment when it turned into glass could be confirmed.

Tschauner et al. Named this crystal 'Dave Maoit' from Ho-Kwang Mao's English name 'Dave'. Also, it seems that diamonds excavated in Botswana contained sodium and potassium in addition to Dave Maoite, but Tschauner et al. Are surprised because these elements are thought to not exist in the deep part of the earth. I am evaluating it as a result.

Tschauner and colleagues continue to search for ultra-deep diamonds with the aim of discovering more minerals. According to Tschauner and others, there is no way to tell how many years the excavated diamonds have been formed, and it is not possible to find diamonds produced in ultra-deep areas like Botswana diamonds. .. “The problem with looking for diamonds is that you don't know where to look,” Tschauner said.