'Shrimp, crabs and octopuses are sensual creatures' recognized by the British government, and progress is being made toward the enactment of a bill prohibiting the act of boiling alive. United Kingdom government ', such as shrimp, crab, hermit crab Decapoda based on reports of crustaceans, squid and cephalopods such as octopus, also have a consciousness', expand the application range of animal welfare (sensory) bill Announced to do. If this amendment enacts an animal welfare (sense) bill, it would be illegal to boil, package and sell shrimp, crabs, octopuses, etc. alive in the United Kingdom. 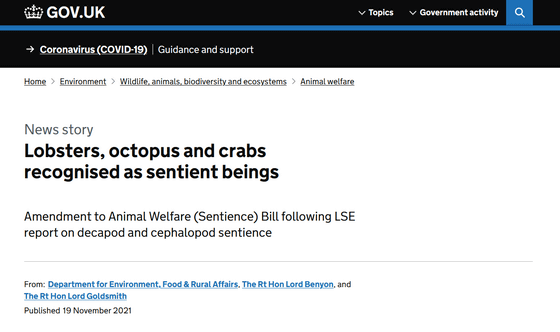 The animal welfare (sensory) bill under deliberation in the United Kingdom prohibits 'acts of boiling or packaging conscious animals alive without fainting or freezing them.' The bill stated that 'all vertebrates are conscious,' but some animal welfare groups have pointed out that 'invertebrates such as crabs, shrimp, and octopuses are also conscious.' Therefore, it is included in the scope of the bill. 'The amendment was submitted in July 2021.

The possibility that the UK will ban the act of boiling lobsters and octopuses as they are, due to the new law that 'crustaceans and mollusks should also be subject to animal welfare' --GIGAZINE And a research team led by Jonathan Birch, associate professor of the Center for Natural and Social Sciences Philosophy at the London School of Economics, has reviewed more than 300 studies, with tens and heads conscious. He argued that it should be included in the scope of the Animal Welfare Bill.

According to the research team, decapods and cephalopods have opioid receptors, which are analgesics, and have been shown to have pain sensation. The research team also points out that 'rejection to physical assault,' such as trying to escape from boiling water, is evidence of pain. Associate Professor Birch said, 'This bill amendment has not been protected so far, even though cephalopods such as octopuses have been scientifically proven to be conscious for years. One of the ways Britain can take the lead in the field of animal welfare is to protect invertebrates, which humans have completely ignored so far. ' I am.

The British government said, 'The Animal Welfare Bill recognizes all animals with a spine as'conscious beings', but unlike other invertebrates, the crusts and heads and feet of the quadrupeds are complex. It has a strong central nervous system, which is one of the important features of consciousness, 'he said, and was willing to accept the results of the report by Associate Professor Birch and others. 'This amendment to the bill will not have a direct impact on existing legislation, industry practices such as fishing, shellfish fishing or the food service industry.'

'The Animal Welfare (Sensation) Bill ensures that animal welfare is properly considered. It is a science that shellfish and soft animals feel pain,' said Zack Goldsmith, Minister of Animal Welfare in the United Kingdom. Obviously, it is natural to be subject to this important law. '