What is the reason why scientists argue that 'Aquaculture should be stopped'? 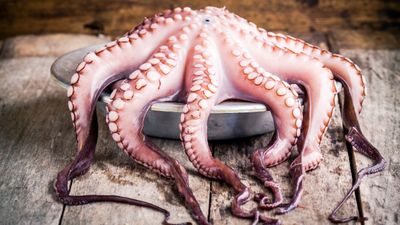 “ Livestock and aquaculture ” is an essential industry to feed human food, but assistant professors belonging to the environmental department at New York University have argued that “octopus farming should be stopped”.

The Case Against Octopus Farming | Issues in Science and Technology
https://issues.org/the-case-against-octopus-farming/

Scientists Are Warning That We Absolutely Must Not Farm Octopuses
https://www.sciencealert.com/scientists-are-warning-that-we-absolutely-must-not-farm-octopuses

Humanity's attempt to 'bring animals to eat' began with sheep. Sheep production is done at least 9,000 years ago, and sheep are the first animals to be domesticated for human consumption. Humans raise goats, cows, pigs and chickens, and eventually they are also raising aquatic animals. Currently, they are raising about 550 types of aquatic animals such as oysters, shrimps, rainbow trouts and bluefin tuna.

Jennifer Jake, who is an associate professor of environmental studies at New York University, criticizes aquatic aquaculture, especially octopus aquaculture, entitled 'Problems for Octopus Aquaculture.' According to the paper, one of the problems with aquaculture is 'impacting the environment.' Specifically, water pollution by nitrogen and phosphorus released from the excrement of cultured fish, water pollution by fertilizers, algaecides and disinfectants, and the possibility that it may be caused by breeding of farmed fish fled from the farm with wild species The spread of certain infectious diseases and the need to reduce the natural sea to secure space for aquaculture are raised as problems with aquaculture.

Another big problem is that “Aquaculture fish is mostly carnivorous”. Most of the land animals that are livestock are herbivores, but cultured fish such as salmon, trout and shrimp are mostly carnivorous fish that eat other fish. One third of the world's catch comes from other species, half of which are used for aquaculture. Aquaculture of fish leads to overfishing such as sardines, nettles, saurys and herrings, which are raw materials for fish meal used as feed for cultured fish. In addition, since octopus is a large-mouthed leprosy and requires three times as much food as other animals of the same weight, cultivating octopus should have many effects on other aquatic resources, so it should be stopped. They argue that they are. There is also criticism of octopus aquaculture from the perspective of animal welfare . In the ' Cambridge of Consciousness on Consciousness ', an international group of neuroanthropologists, neuropharmacologists and neuroscientists gather to re-evaluate conscious experiences and related behaviors in humans and non-human animals, the octopus is a conscious experience Is listed as the only invertebrate possible. According to experiments on octopus, it has been known that octopus can remember how to open storage containers for 5 months, and that it can recognize humans individually .

Octopus is known to eat its feet when it is confined in a certain space such as an aquarium. It has been suggested that this may be evidence that high levels of cognitive stimuli are being sought, such as 'an octopus explores the wide ocean.' Therefore, it has been pointed out that in the aquaculture environment, the octopus is not given a high level of cognitive stimulation, and that there are ethical issues regarding animal welfare.

On the other hand, demand for octopus as food is growing worldwide, and in 2018 the price of octopus has soared due to a shortage of supply . In response to this rising demand, “Aquaculture of octopus” projects are in progress around the world. As Jake et al.'S research group said, “We aim to stop octopus aquaculture by focusing on welfare and environmental issues. Governments, private companies, and academic groups Needs to look at sustainable and caring food production, ”he said, should look at food production methods other than aquaculture.