Tesla has launched a pilot program that will allow non-Tesla vehicles to use the supercharged network it develops for its EVs. Ultimately, the policy is to make it possible to use superchargers around the world regardless of whether they are Tesla cars or non-Tesla cars. 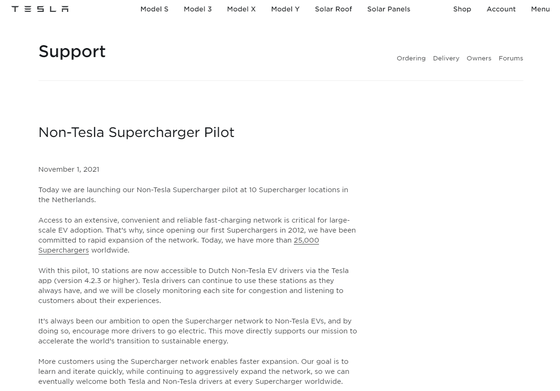 Tesla is letting non-Tesla EVs use its Supercharger network for the first time --The Verge
https://www.theverge.com/2021/11/1/22757159/tesla-supercharge-ev-pilot-netherlands

The first supercharger was installed in 2012, and in the nine years since then, more than 25,000 superchargers have been deployed worldwide. The charging speed is high and the reliability is high, and it enhances the convenience of Tesla's EV, but unlike gas stations, there is a constraint that only Tesla cars can be used.

To use it, the Tesla app (version 4.2.3 or later) is required, and for the time being it will be open only to EV drivers living in the Netherlands. However, the scope is planned to be expanded in the future, and in the future, it is expected that any supercharger will be able to charge non-Tesla vehicles as long as there is available capacity.

In addition, it is said that there is no difference in usage price between Tesla users and non-Tesla users.