Report that eyes have grown on human 'mini-brain' cultured in the laboratory, respond to light A paper was published on August 17, 2021 that succeeded in forming a primitive eye with an organ called the

optic cup in the cultured brain. Since the activity of nerve tissue that responds to light was confirmed in the miniature-sized brain and eyes made in the laboratory to study the human brain, we will study retinal diseases and the retina for medical use in the future. It is expected to be useful in the manufacture of retinas.

The brain created in the laboratory using human iPS cells is called 'cerebral organoid ', and past studies have succeeded in detecting fetal-like brain waves from bean-sized brain organoids. .. 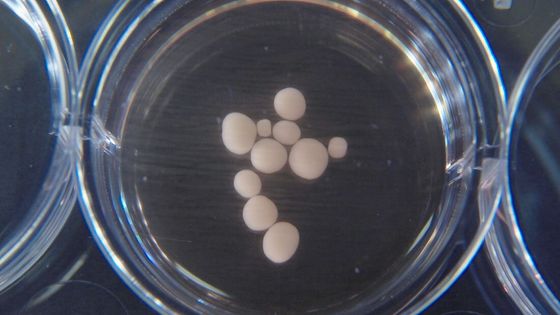 Since these brain organoids have an extremely simple structure, it is said that 'consciousness does not sprout', while since they are living tissues made up of human brain cells, the mechanism by which cranial nerves develop is elucidated. It is useful for modeling brain diseases and testing drugs.

Some time optic cup and optic vesicle primitive eye tissue Germany Dusseldorf University Hospital Jay Gopalakrishnan et al research team that had studied the development of, such as, instead of culture, 'the eyes of the organization directly , Why don't you generate eyes from cerebral organoids? ”, And first prepared iPS cells derived from four donors.

As a result of culturing this brain organoid, we succeeded in forming the optic nerve head in 72% of the total of 314. The earliest formed optic vesicles 30 days after creation and had mature optic discs 60 days later. The rate of development of this cerebral organoid is exactly the same as the time of development of the eyeball in the human foetation.

The brain organoids created by the research team are equipped with various types of retinal cells, and in addition to tissues such as the crystalline lens and cornea, a network of nerve cells that act in response to light was also confirmed. The research team has been culturing the optic disc for some time, but this is the first study to generate an optic disc from a brain organoid. Gopal Mr. Krishnan is, about this research result, 'In the mammalian brain, retinal ganglion cells , but had found that extending the nerve fibers connected to the brain, that it is In Vitro , that is experimental in the room This is the first time the study has shown it. '

The research team plans to develop a technology for long-term preservation of the optic nerve head and use it for research to elucidate the mechanism of retinal disease.