Google, which has laid many submarine cables, announced that the laying of the transatlantic submarine cable 'Grace Hopper ' that connects New York City in the United States to the United Kingdom and Spain has been completed, and preparations for operation are almost complete.

Our Grace Hopper subsea cable has landed in the UK

Today, our Grace Hopper cable has landed in Bude, Cornwall.

Connecting the US, the UK and Spain, this new subsea cable will help achieve the rapidly growing demand for high-bandwidth connectivity and services.

This 'Grace Hopper' was announced by Google in July 2020. In an announcement at the time, Google said, 'The new Coronavirus Pandemic makes it important to have a reliable Internet connection,' and connecting to submarine cables around the world will make the global submarine cable network even better. It was supposed to be fulfilling. It should be noted that the name 'Grace Hopper' programming language ' COBOL is an American soldier, computer scientist, known as a developer of' Grace Hopper comes from Mr. 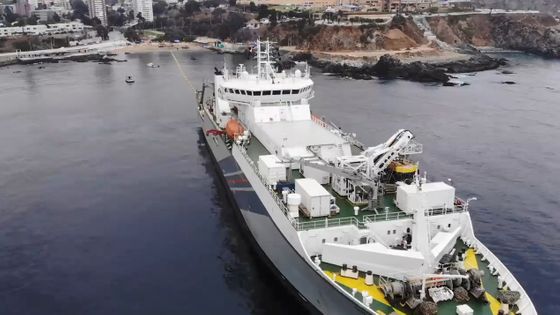 Grace Hopper is a 16-fiber pair (32-fiber) submarine cable that connects New York City in the United States with Bude City in the Cornwall region of the United Kingdom and Bilbao City in the Basque Country of Spain, and is scheduled to start operation in 2022. 
The Grace Hopper, which is the first submarine cable funded by Google to connect to Spain, is said to have adopted the latest fiber switching that can move traffic well even in the event of a power outage.

'Grace Hopper uses a new switching architecture to maximize network flexibility and resiliency to handle unexpected failures and traffic patterns. The new fiber switching is uncertain. It's an important breakthrough for the high era and will tightly integrate the Google Cloud region, which will be built in Madrid, Spain, with our global infrastructure. '