'Creamy Eggs & Bacon ' and ' Teri Chiki Eggs ' provided by Domino's Pizza in 2020 were well received, and from September 6, 2021, ' Creamy Eggs Genovese ' and ' Creamy Eggs and 4 Kinds of Mushrooms' Is newly launched. From the same day, it is said that 'Tsukimi Quattro ', which allows you to enjoy the above four types at once, has appeared, so I actually ordered and enjoyed the egg-made pizza. 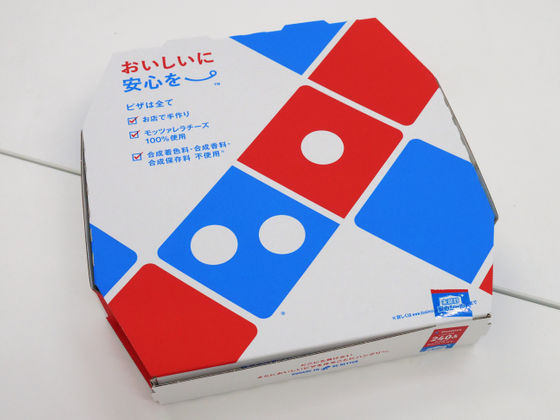 Opened. 'Tsukimi Quattro' is a quattro pizza that combines 'Creamy Eggs & Bacon' and 'Teri Chiki Eggs' that appeared in 2020 with the new 'Creamy Eggs Genovese' and 'Creamy Eggs and 4 Kinds of Mushrooms'. This time, the bread dough has selected the default hand toss. So, let's start with the new 'Creamy Egg Genovese'. 'Creamy Egg Genovese' is a bright yellow pizza with plenty of basil sauce and egg spreads, and the other ingredients are Italian sausage, mayonnaise and sliced eggs. When I try to eat it, the flavor of basil sauce and mayonnaise spreads out, and the impression that the moon-viewing of egg spreads and sliced eggs becomes stronger with each bite. Italian sausage adds the umami and saltiness of the meat and adds depth to the taste. Overall, the basil sauce and moon-viewing taste were the main characters, and the taste was harmonious and cohesive rather than sharp. 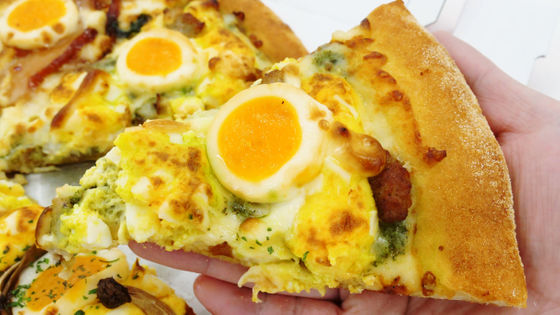 Next, we will eat the new 'Creamy Eggs and 4 Kinds of Mushrooms'. '4 kinds of mushrooms' is written as 'mushroom mix' on the official website, but when I inquired, it was 4 kinds of Maitake, King trumpet, Bunashimeji, and Hiratake. Other ingredients are egg spreads, sliced eggs, parsley and demiglace sauce. 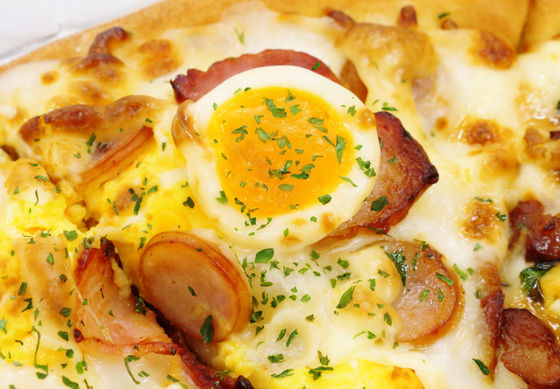 When I tried it, the taste of the egg spread, which was entwined with mayonnaise and white sauce, exploded. When chewed, the umami of the meat popped out of the sausage, adding an accent to the combination of white sauce and egg spread, which had a gratin-like taste, and it was a very classic taste. As the name suggests, the main pizza is teriyaki chicken, teriyaki sauce, and sliced eggs, and the other ingredients are spinach, mayonnaise, and camembert mixed cheese. When I tried it, the taste of Camembert cheese mix was surprisingly strong, as good as the taste of teriyaki. The sweetness of teriyaki and the umami of cheese are accented by the bitterness of spinach that is sometimes felt, and the pizza is balanced despite its strong taste.