Google Chrome 93 stable release, update every 4 weeks from now on 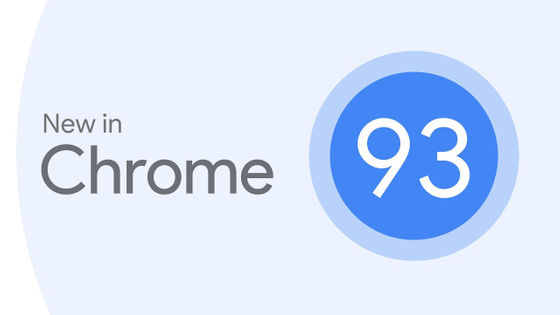 Version 93.0.4577.63, the latest stable version of the web browser ' Google Chrome', has been released. There are many updates for developers.


◆ Shortening the release cycle
As announced in March 2021, the release of Google Chrome changes every four weeks. However, the next Chrome 94 will be released on September 21, 2021.

◆ Supports CSS module
CSS modules can now be read with import statements, just like JavaScript modules. The loaded module can be applied to the entire document or the Shadow DOM of the web component using 'adopted Style Sheets' as it is.

◆ Updated multi-screen window placement API
The multi-screen window placement API provided as part of the Origin Trial has been updated with properties that allow you to quickly see if multiple displays are connected, a function that allows you to get all display details at once, and a new display. Functions such as functions that can take actions when connecting or disconnecting have been added. · Block connections on port 989 and port 990
As a countermeasure against ALPACA attacks , connections to HTTP, HTTPS, and FTP servers on ports 989 and 990 now fail.