Tesla, which develops autonomous driving systems using electric vehicles, announced 'D1', a custom ASIC (application specific integrated circuit) for AI learning, at the presentation event 'AI Day' about AI. The ASIC will be incorporated into Tesla's supercomputer, Dojo, and will be operational in 2022.

Sensors are a bitstream and cameras have several orders of magnitude more bits / sec than radar (or lidar).

Radar must meaningfully increase signal / noise of bitstream to be worth complexity of integrating it.

As vision processing gets better, it just leaves radar far behind.

Until now, no specific information was released about the supercomputer developed by Tesla, but Tesla revealed the supercomputer 'Dojo' for the first time on AI Day. Dojo is a distributed computer architecture with a large compute plane, low latency and ultra-high bandwidth. In addition, Tesla has revealed the details of the ASIC 'D1' that makes up this Dojo. The D1 is designed in-house to eliminate bandwidth bottlenecks in machine learning, and TSMC's 7nm process node is used. The die area of D1 is 645 mm 2 , and the number of transistors is more than 50 billion. Tesla states that TDP (Thermal Design Power) 400W and The multi-chip module 'Training Tile' that integrates 25 D1s is said to have 9P (peta) FLOPS and off-tile bandwidth of up to 36TBps in BF16 / CFP8. However, Dojo is still unfinished and has not yet reached the stage of full commercialization, and according to Tesla's senior director of autonomous driving hardware and leader of the project Dojo, Ganesh Venkataramanan, the first training in August 2021 The tiles have just been delivered and tested. Tesla is a supercomputer that can calculate

1.1E (Exa ) FLOPS by connecting 10 cabinets to give 100PFLOPS computing power to one cabinet by mounting two racks connecting 6 training tiles. Claims that it is possible to build a computer. Elon Musk said Dojo will be up and running in 2022. 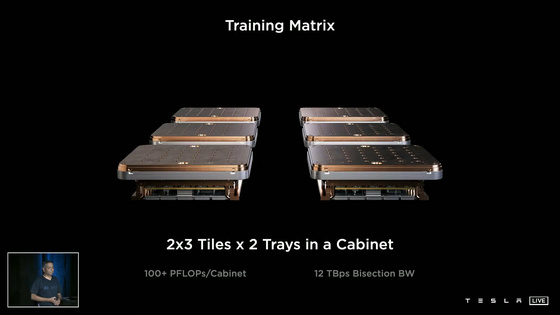 In addition, Tesla's AI Day can be viewed in the following movie. The announcement about Dojo will start around 1 hour 45 minutes 40 seconds.