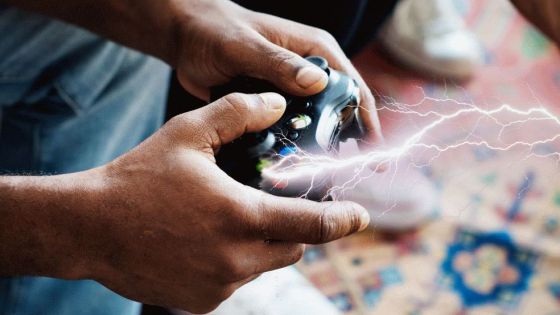 Many people think, 'Even if thunder strikes, it's safe to escape indoors.' However, there have been several reports of extremely unlucky cases, such as 'when I was playing a video game indoors, I was shocked by a lightning strike through the controller.'

The National Weather Service released a report on July 31, 2021 that 'in Robertson County , Tennessee, a man indoors was hit by a lightning strike through a video game controller.' According to the ambulance crew who rushed in after being contacted by the man, the man's symptoms were mild and he was not taken to the hospital.

In the case of the man mentioned above, it was mild, but Karma , a professional player of the popular sports game 'Rocket League ', suffered a lightning strike via a controller on June 29, 2020, and got burned in his hand. I owe it.

Actually think I just got struck by lightening thru my controller ...

Fifteen minutes after the first tweet, he reported, 'I contacted the doctor. I got burned in both hands and the controller broke.'

UPDATE: talking to doctor, hands are burned and controller is broken.

The next day, he said, 'I had a slight burn as a result of cooling the affected area all night. The controller melted around the USB connector. I'm completely fine.' The controller broke. It reports that the effect on the body of things was small.

UPDATE v2: Hands healed up after being iced all last night and were very minor burns, controller is melted near USB connection where I got flashbanged or w / e and I am COMPLETELY FINE.

thanks for the outpouring of love https://t.co/X7ZbCh2Fmq

Luke Plunkett , a senior writer for game-related media Kotaku , also said, 'When I was playing on PlayStation 2 , there was a lightning strike near my house. I didn't get an electric shock at that time, but the TV The screen display has gone crazy and now I'm seeing a purple screen, 'he says of his experience with lightning and games.