Is Windows 10 really slowing down with every version upgrade? The verification result looks like this 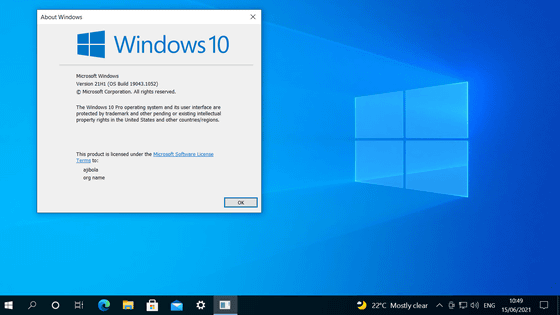 Windows 10 releases major version updates about twice a year. With each version update, new features and specification changes are made, and it is often whispered that 'it is slower than the previous version' and 'performance has deteriorated due to the update'. So, regarding the question 'Is Windows 10 really slow due to version upgrade?', YouTuber NTDEV, who is conducting various experiments on Windows, has posted the result of comparing the performance and speed of each version on the blog. ..

State of the Windows, part 2: Did Windows 10 slow down with each feature update? – NTDEV
https://ntdotdev.wordpress.com/2021/02/21/state-of-the-windows-part-2-did-windows-10-slow-down-with-each-feature-update/

Below is a table summarizing the Windows 10 version released at the time of writing the article, OS build, code name, and release date.


This time, NTDEV compared builds 10240 through 19041. For performance comparison, I use Hyper-V as a hypervisor and do a clean install of each build. And it seems that 4GB of RAM and 4 cores / 32GB fixed disk were used for each build.

◆ 01: Installation time
Setting up the OS is the first opportunity for end users to come into contact with the OS. Windows should be evolving to install as smoothly and efficiently as possible. We use an installation image using the Windows Imaging Format for consistent and accurate results in each build. We also use unattended response files to reduce human error as much as possible.

The result is the line graph below. The fastest to install was RS5 with build 17763, which took 18 minutes and 40 seconds. The later you build Windows 10, the more disk space you will use, which should take longer to write and set up. However, in reality, it cannot be said that 'it takes longer to set up each time the version is upgraded', and it can be seen that the setup time is rather shorter after RS5. 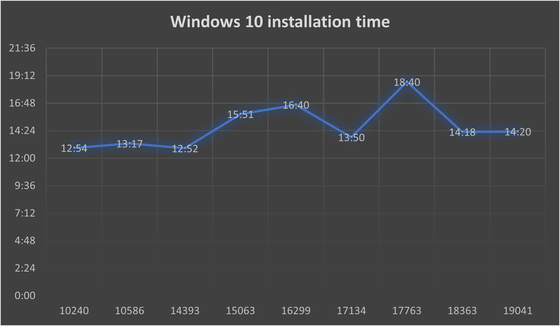 ◆ 02: Startup time
Next, the result of measuring the startup time for each build with the fast startup function disabled is as follows. Although the startup time is faster with build 15063, the overall trend is that it increases with each version upgrade. 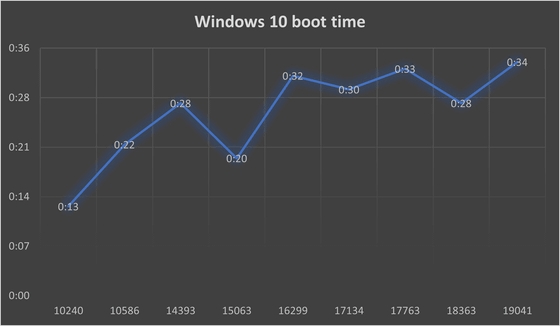 Also, if you look at the graph that summarizes the restart time for each build, you can see that it is very similar to the startup time. 'Due to new security technologies and new services implemented in new builds of Windows, subsequent builds take longer to boot,' NTDEV points out. 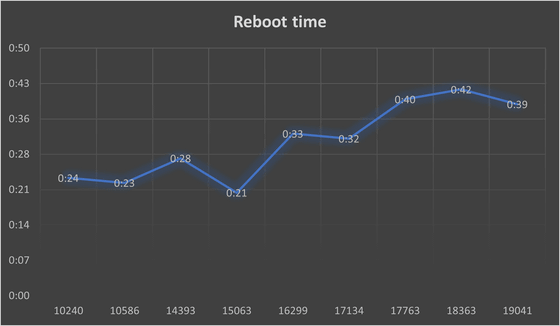 The result is a line chart below, which takes more than twice as long as build 17763 and later. 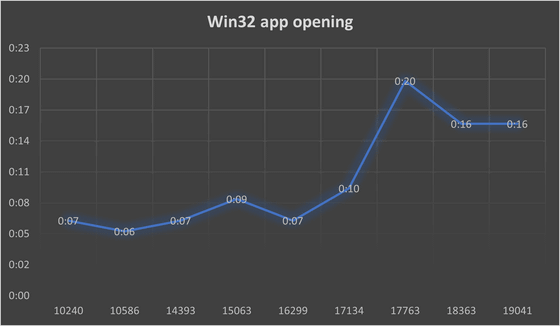 The result is as follows, and you can see that the average startup time of UWP increases with each build. The fastest boot time was 1 minute and 3 seconds for build 18363, which is about five times longer than build 10240. NTDEV argues that 'the launch of UWP apps has slowed down with each version upgrade.' 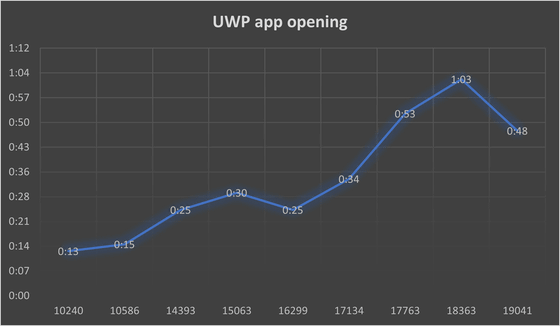 ◆ 05: Windows Search
Next, NTDEV used Windows Search to measure the time it took to find all the instances of msinfo32 in the C drive. The results are as follows. It was disjointed depending on the build, and there was no overall increasing or decreasing trend. 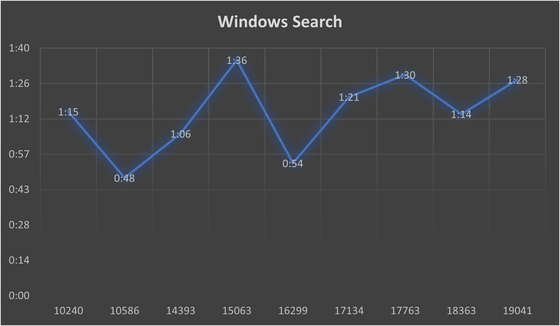 ◆ 06: GDI stress test
Next, we will compare the performance of

Graphics Device Interface (GDI), which performs processing such as drawing straight lines and curves, rendering fonts, and controlling palettes in Windows. NTDEV said, ADeltaX Mr. developed REGDI in, we measured the time it takes to render a slightly lower 9900GDI handle than the maximum threshold.

The result is as follows, the rendering time tends to increase until build 18363, but it has dropped sharply in build 19041, NTDEV said, 'It looks like there was a fix around GDI performance in build 19041.' I have commented. 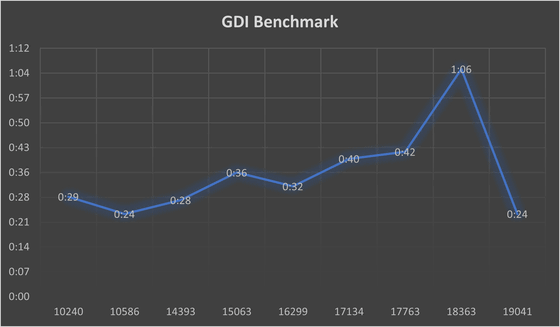 ◆ 07: Explorer stress test
NTDEV created a simple batch script that opened an instance of Explorer, a standard Windows filer, and measured GDI rendering speed and 32-bit app launch time at the same time. The result is the graph below. 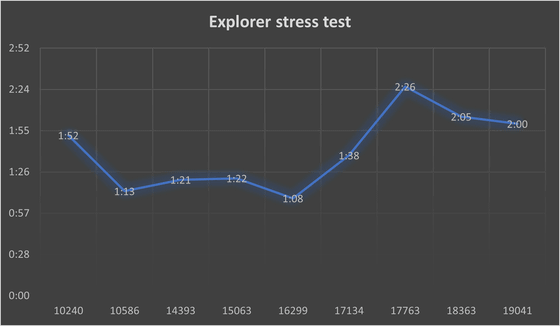 NTDEV said, 'Since build 17763, the time has increased significantly again. The GDI stress test confirmed that build 19041 showed a dramatic improvement in GDI performance, but the explorer stress test still reduced the time. In other words, it seems that the slower startup speed of the Win32 app has led to a longer time in the Explorer stress test. '


Windows Defender , the standard Windows antivirus software, has become more and more inseparable from Windows with new features added with each version update. The graph below shows the result of measuring the time required for such a quick scan of Windows Defender. 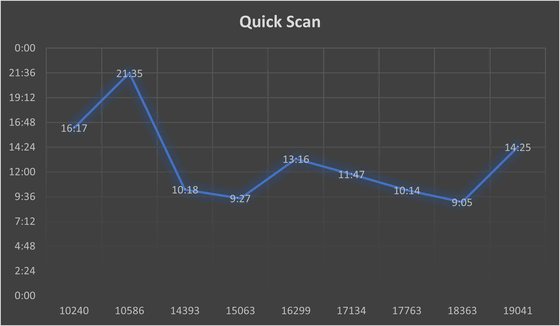 The first two builds have taken quite some time, but have been dramatically faster since

the Windows 10 Anniversary Update, which started with build 14393. You can see that the quick scan takes less time compared to the first build 10240, although it has moved up and down since then.

◆ 09: Disk I / O performance
To test the performance of the I / O subsystem, NTDEV used Diskpd, an open source command line tool provided by Microsoft. The setting command looks like this.

Below is a graph summarizing the total input / output of reading and writing discs. The higher the number, the better the performance. Build 17763 had the best score. From there to build 19041 is almost flat, so NTDEV suspects that build 17763 probably improved the I / O subsystem. 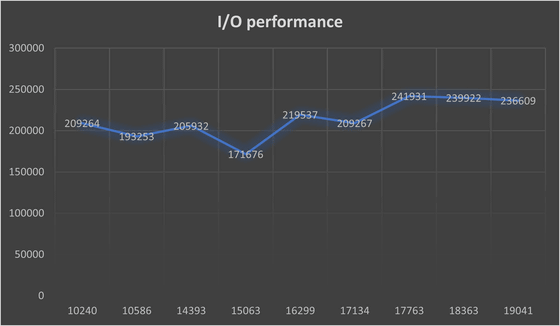 ◆ 10: Shutdown speed
NTDEV measures the time it takes to shut down each build, while saying that 'the shutdown speed of the OS is not very important for using the OS'.

Looking at the graph below that summarizes the time required for each shutdown, build 10586 and build 14393 shut down in 5 to 6 seconds, but most of them shut down in about 10 seconds. The phenomenon that 'shutdown is taking a long time' was not confirmed. 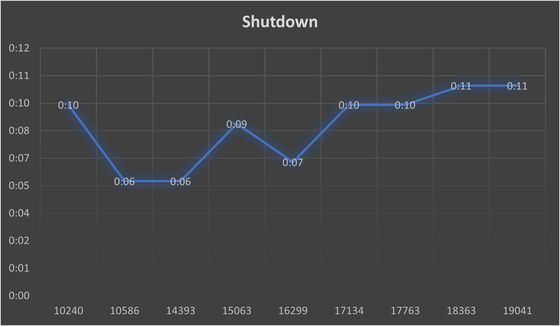 Based on 10 types of tests, NTDEV responded to the question 'Did Windows 10 slow down over time?' 'There are a few such parts, but the security and I / O subsystems are versions. Improvements have been seen with the ups. '