Research results show that food can be produced '10 times more efficiently' by using the power of sunlight and microorganisms. Not only the rice, bread, and vegetables on the table are derived from plants, but also the cows and pigs that make meat grow on forage crops, so it can be said that most of the food that modern people eat is produced by plants. .. A new paper published by researchers at the Max Planck Institute in Germany found that culturing microorganisms, not plants, with solar energy can synthesize food more than 10 times more efficiently than crops such as soybeans. I did.

Food problems are becoming more and more serious due to population growth and changes in eating habits. In particular, since 26% of the land area on the earth and 83% of the agricultural land are used for grazing land for raising livestock and forage crops, the spread of meat-eating food culture significantly increases the environmental destruction caused by agriculture. It is pointed out that. A research team led by Dorian Leger of the Max Planck Institute for Molecular Plant Physiology, who is working on food and environmental issues, is focusing on the 'microbial protein (SCP) ' produced by microorganisms and renewable energy such as solar power generation. We conducted a study to calculate and compare the energy efficiency of the case where microbial protein is produced in Japan and the case where protein is produced in crops such as soybeans.

Below is a schematic diagram of food production by SCP proposed by the research team. The electrical energy obtained from photovoltaic power generation is sent to a device that extracts carbon dioxide from the atmosphere, and oxygen is produced from the carbon dioxide. The mechanism of food production by SCP is that the bioreactor is operated with the energy of oxygen and solar power to cultivate microorganisms, and the SCP produced by the microorganisms is used as a raw material to produce food and feed for animals. is.

Estimating how much food can be produced by a food production method that combines solar power generation and SCP, it was found that 1 hectare can produce 15 tons of protein per year. In fact, 520 people were able to get the amount of protein they needed for a year. On the other hand, in the case of soybeans, which can produce protein most efficiently, the amount of protein that can be produced is 1.1 tons per year, which is equivalent to 40 people, which is less than 1/10 of the above production method. 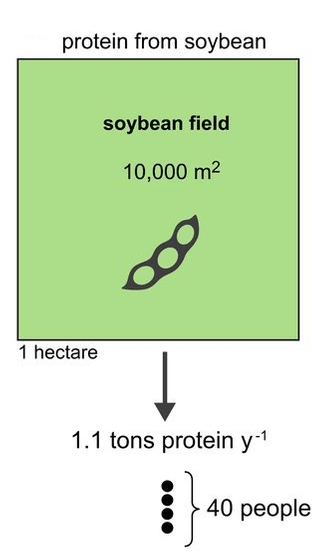 According to the research team, although this paper focused on 'soybeans and proteins,' similar results can be obtained by comparing foods and microorganisms in various fields, such as 'production of cooking oil by palm oil and microorganisms.' That thing. 'Microorganisms are so versatile that they will eventually be able to produce a wide variety of foods and products,' said Leger.

In addition, since this system has good efficiency of land, water, and fertilizer, it is possible to produce food even in areas other than land with a lot of sunlight and fertile soil. On the other hand, the cost is several times higher than that of meat, but it is expected that the cost will decrease due to the development and spread of technology.

''Microbial foods' are so promising that I think they are one of the major contributors to the resolution of the food crisis,' Leger said of the findings.

In addition, as an attempt to turn the protein produced by microorganisms into food, ' Mycoprotein ' developed by British food maker Quorn has already appeared, and you can read the result of actually eating what it tastes like from the following.

What kind of taste is the fungus 'mycoprotein' tasting review that can be eaten instead of meat? --GIGAZINE