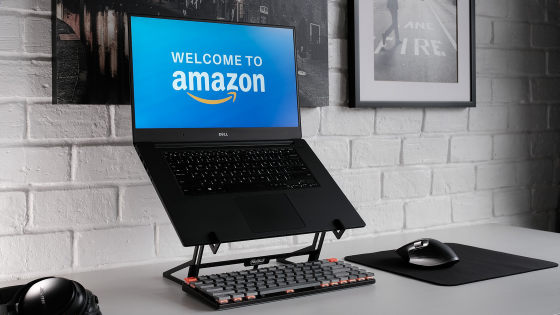 Internal documents reveal that Amazon ranks its employees and makes an 'unregretted attrition' to the bottom 6% of employees each year. Amazon denies it, but it has been pointed out that this is a 'stack ranking'.

Immediately after the New York Times pointed out how to evaluate employees in 2016, Amazon announced that it had significantly simplified the evaluation process. This included stopping the goal of 'reducing workforce without regrets', but Amazon will dismiss the bottom 6% of employees every year by 2018, 'reducing workforce without regrets'. It turns out that it has been revived.

According to a slide of the presentation, which is an internal document obtained by the Seattle Times, Amazon asked a team of managers consisting of more than 50 people to evaluate employees. The evaluation was to assign the top 20% of employees to the 'top class' and the bottom 5% to the 'most incompetent'. Amazon's HR department then asked managers to provide 'documented coaching' to subordinate employees through an internal dashboard called 'Ivy' or to report problems to their managers. 'Documented coaching' is commonly used as evidence that a company has 'helped an employee' when a worker is sued. It seems that this slide did not have a date, but it is believed to be from 2020 or early 2021 because the slide mentioned the 2021 performance evaluation timeline. According to the Seattle Times, Slide tells managers 'unnatural behavior that undermines fairness and credibility,' such as dropping high-ranked employees to the lowest ranks to meet the recommended rating distribution. He told me to avoid it. In addition, it was stated that the evaluation should be based on the performance standard, and the target employee should not be evaluated in comparison with other employees.

However, at the same time, the manager evaluated his subordinates on a 7-point scale for 'how much he was responsible for his role' and on a 4-point scale for 'potential for achieving goals compared to other employees', and scored a maximum of 28 points. I was asked to calculate.

The following is a PDF file of the internal document. 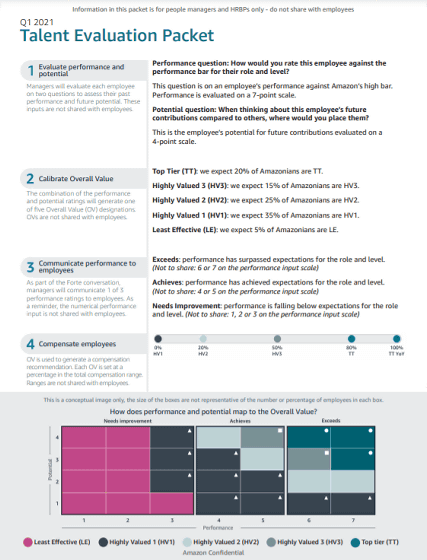 In the figure below, the vertical axis shows potential, the horizontal axis shows performance, the left 3 columns are 'need to be improved', the middle 2 columns are 'achieved', and the right 2 columns are 'excellent'. I will. Also, by color coding, you can see 'the least ability (purple)' and 'top layer (blue-green)'.

According to the AWS director, Amazon's performance rating is primarily used to determine salary increases for the year. The AWS director said, 'Managers can't be punished if they don't follow the distribution map above exactly,' but check and balance whether the manager is making an unreasonable assessment to fit the distribution map. I also admit that did not exist. In addition, the Seattle Times has received testimony from a person who was once an Amazon manager, 'I evaluated my subordinates as'the least capable'to meet the company's goals.' In fact, the Seattle Times explained that Ivy was able to adjust employee scores and see if the overall score distribution matched Amazon's distribution map.

Meanwhile, Amazon spokeswoman Jaci Anderson said the slides weren't created by a central HR team, as they already contain terms that Amazon doesn't use. I will. 'We have never evaluated employees in stack rankings,' Anderson said, and the performance evaluation process 'provides employees with a lot of information and insights to keep them growing in Amazon's career.' 'To do' was stated as the purpose.

However, Chris Bloomquist, co-founder of recruiting company The Talent Mine, points out that Amazon's rating system 'finds weaknesses rather than strengths of employees,' and is doing stack rankings. I described Amazon's claim that it wasn't a 'bold lie.'