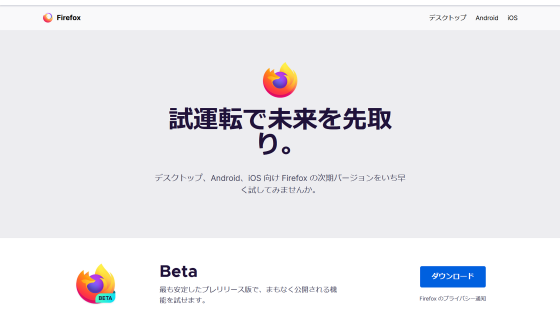 On April 16, 2021, QUIC and HTTP / 3 are now supported in the versions 'Firefox Beta' and 'Firefox Nightly' that introduce Firefox's testing phase features. Originally, QUIC was a protocol originally implemented by Google in Chrome and its own services, but standard specifications have been developed, and in 2018, a new communication protocol with QUIC as the transport layer was named 'HTTP / 3'. I did. Firefox representative Dragana Damjanovic said, 'HTTP / 3 takes less time to connect than HTTP / 2, and is designed to avoid clogging with multiplexed request processing, resulting in better packet loss. It can be detected and repaired. '

When connecting to a web server with Firefox Nightly and Firefox Beta, it will automatically try to use HTTP / 3. The web server can also support using Alt-Svc response headers and DNS over HTTPS.

Note that the client and server must have the same version of QUIC and HTTP / 3 in order to connect to each other. When connecting to the website, if you display the network request information with Firefox development tools, it will be displayed that Alt-Svc or HTTP / 3 was used.

These features are experimental and Damjanovic seeks feedback.