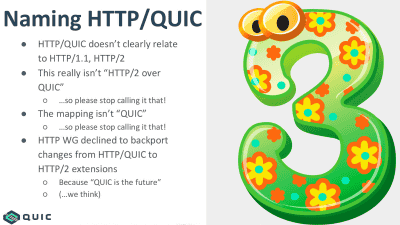 The Internet Engineering Task Force (IETF), a trade association that standardizes the Internet's network protocol, announces that it will change the protocol called "HTTP-over-QUIC (hq)" to " HTTP / 3 " did.

The protocols currently used on the Internet such as HTTP / 1.1 and HTTP / 2 are based on TCP ((Transport Control Protocol). In TCP, data is confirmed to be received in the order of transmission, and during transfer It has high reliability because it has an error checking function that can be detected on the receiving side when some data is lost, but TCP has a lot of communication between the server and the client Because it requires round - trip, there was a drawback in terms of high speed communication.

On the other hand, UDP (User Datagram Protocol) has the merit that communication cost is small instead of having the function of checking data errors and order. UDP is a protocol that gives priority to responsiveness rather than reliability, and it is used in situations where real time nature such as streaming service is required.

HTTP-over-QUIC brings the technical idea of ​​experimentally developed protocol "QUIC (Quick UDP Internet Connections)" to HTTP, which is strictly not compatible, but the essence is the same. Therefore, since HTTP-over-QUIC is different from TCP / 2 based HTTP / 2, finally IETF changes the name of HTTP-over-QUIC to "HTTP / 3" even to distinguish it clearly It seems to be decided. 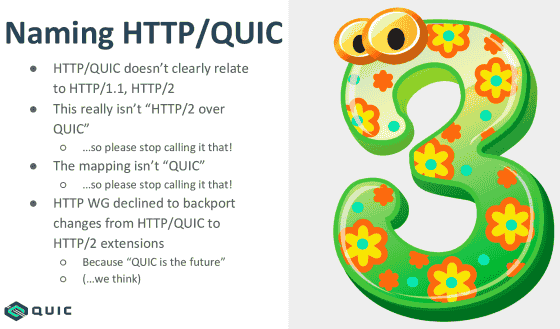