On its official blog, Microsoft announced an in-house data center that uses a 'two-phase liquid immersion cooling system' that cools a server by immersing it in a liquid that boils at low temperatures.

On the eastern bank of the Columbia River, which flows from the northwestern United States to the Pacific Ocean, there is a data center that supports communication systems such as e-mail exchanged by Microsoft employees. The data center has a steel tank that houses a server, which has a boiling point of about 50 ° C, which is lower than water, and is filled with a 'high-performance liquid' that is harmless to electronic devices.

In the tank, the boiling liquid rises as steam, is condensed by the cooling device on the top of the tank, and is pouring into the tank like rain. Microsoft embarked on the development of an immersion cooling system because

Moore's Law, which states that 'semiconductor integration rate doubles in 18 months,' has reached its limit.

Since Gordon Moore, one of Intel's founders, discovered this law in 1965, the semiconductor industry has doubled processor performance every two years without increasing electricity consumption for decades. I have come. However, as the width of circuits has reached the atomic level and the improvement of semiconductor integration is approaching the physical limit, it has been whispered in recent years that 'Moore's Law has collapsed .'

While the performance of processors is reaching the limit, the demand for computing power is increasing year by year due to mining of cryptographic assets (virtual currency). As a result, the semiconductor industry has begun to steer toward increasing electricity consumption and improving performance, but as processors consume large amounts of electricity, so does the amount of heat they generate.

Christian Belladi, an engineer in the Advanced Data Center Development Group, said, 'Air cooling is no longer sufficient to cool hot chips, so the liquid boils directly on the surface of the chips to cool them. We considered adopting liquid immersion cooling. ' 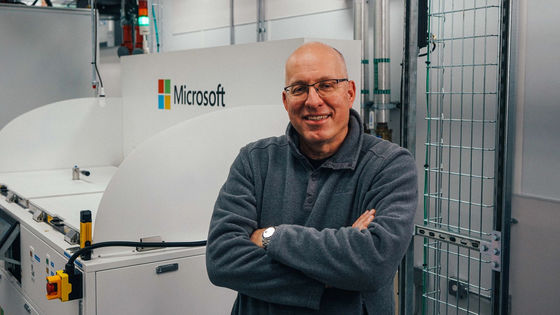 After investigating the effectiveness of the immersion cooling system, Microsoft found that this cooling method could reduce server power consumption by 5% to 15%. So Microsoft has partnered with data center designer Wiwynn to build a data center that cools servers with 'high-performance liquids' developed by electrical material maker 3M.

The data center with the two-phase immersion cooling system, which started operation in this way, not only consumes less power but also does not consume water, so it ' provides more water to be consumed by 2030.' It is also expected to contribute significantly to Microsoft's sustainability efforts to 'make it possible.'

'With proper use of a two-phase liquid immersion cooling system, you can meet all cost, reliability, and performance requirements at the same time with less energy than air cooling,' said Ioanis Manosakis, chief software engineer at Microsoft Azure. Probably. '

A project similar to this data center is 'Project Natick, ' which submerges the entire data center on the seabed and cools it with seawater. You can understand the contents of Project Natick by reading the following articles.

Microsoft has set up a data center under the sea, and clean specifications where electricity is covered only by renewable energy --GIGAZINE 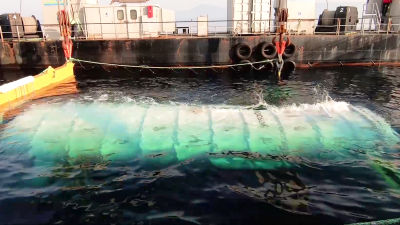 Submerging the server on the seabed or in liquids makes it difficult to replace or service parts. Therefore, Microsoft plans to develop a tank-type server that does not require immediate replacement of defective parts. These tank-type servers are easy to install in remote areas where human maintenance is difficult, and can also be operated in self-driving cars and 5G mobile communication towers.

Microsoft plans to begin validation testing of the technology so that one tank becomes a data center within the next few months. 'The first step is to get people familiar with the concept and show that this approach works,' Belladi said of his enthusiasm for his next goal.