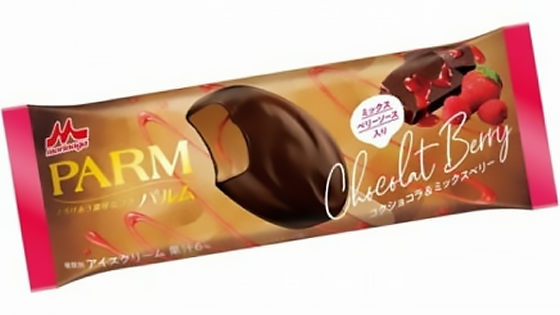 'PARM Kokuchocolat & Mixed Berry ', which is made by filling chocolate ice cream with mixed berry sauce in a marble shape and wrapping it in a soft-tasting semi-sweet chocolate, will be released on April 5, 2021. The sweet and sour mixed berries using strawberry pulp and raspberry juice go well with the rich chocolate ice cream that contains Ecuadorian cocoa mass and two types of cocoa. The price is 140 yen excluding tax.

'Let's write a novel', an app with simple and convenient functions for people who write novels on their smartphones --GIGAZINE

[Cosplay Summary] Super high quality 'AnimeJapan 2018' cosplay photo summary as if you jumped out of that Enako, anime or game --GIGAZINE

The relationship between the evil 'gambling' and the correct 'insurance' --GIGAZINE

What is the only word that turns anxiety and worry into success? --GIGAZINE

The fish market in the country that eats the most fish in the world is full of tuna, and I walked around Male, the capital of the Maldives --GIGAZINE

I want you to read the composition of the eldest daughter, elementary school 1, though it is long.
As a parent, I burst into laughter. pic.twitter.com/oT34BckFFJ

Some of the variety shows I often see these days pic.twitter.com/Azt7iNhOCp

My cat is really funny pic.twitter.com/Zym1MZvLwb

I don't think the name of the intersection that flew so much is so pic.twitter.com/C8yAWkfg48

What I learned from my experience with Kigurumi GP.
This person is amazing! Pic.twitter.com/3v1MF7QsWC

Police are searching the building where the office of the recall office in Higashi-ku, Nagoya was located on the afternoon of the 24th due to the illegal signature issue over the recall movement of Governor Omura. https://t.co/aXIUp8CdWe

It is said that a container ship has stranded on the Suez Canal and cannot pass through. https://t.co/zsEgsQcoZH pic.twitter.com/dJqf2wnpEI

It's not the case, but I like the photo of the Suez Canal being blocked, and the feeling of a CD jacket pic.twitter.com/njXlbzRQvz

All the tugboats were mobilized, and although they were digging a grounding site with an excavator, they could not move at all, and the berths before and after the canal were quickly filled with vessels that were trying to pass.

'Annual income of 30 million yen guaranteed' with an admission fee of 300,000 yen ... The malicious reality of 'information merchandise vendors' who are dying in the virtual currency bubble | Bungei Online

Physical restraint at a psychiatric hospital, Japan's prominence 599 times that of Australia, 2000 times that of NZ | Mainichi Shimbun

Just stab a 100-square wooden stick into a 4-pack yogurt and chill it in the freezer to harden it. It's delicious and low-calorie yogurt ice cream (* ´꒳` *) My personal recommendation is the blueberry flavor of Meiji Bulgaria yogurt ???? pic.twitter.com/tXBnyb8r9C

Collaboration of cherry blossoms and snow It is a miracle of nature that is rarely seen pic.twitter.com/nR9TPrkTjZ

A baby harbor seal with a nose in the water of the pool ... Interesting pic.twitter.com/D27d3xQFmc

The park, which had been turned into a smoking area, is now completely non-smoking by banning ball play and excluding children, banning dogs and excluding pet owners.
And no one is gone. What do you want to do in the park. pic.twitter.com/bImRTxST0i

Counterargument against stupid people saying 'Kyoto has only tourism industry, so inbound disappears and it's hard' pic.twitter.com/LhEK9QR7Qz

I tried collecting 'soft colors' that can be used as a background pic.twitter.com/F81Tb9DObp

LINE's end-to-end (E2E) encryption 'Letter Sealing', but if you paste the URL in the text chat, you will be accessed from the LINE IP address to create a preview. I think it is better to avoid posting URLs for pages containing confidential or personal information, private content, etc., or temporary URLs for authentication. #LINE

From around 16:50 on March 23, 2021, our Twitter account '@enetATM' has been continuously tweeting our unintended tweets that seem to be spam.

In addition, the profile has been rewritten, which reveals that the account has been hijacked.

How to draw enamel boots pic.twitter.com/QoPWsenuzT

Behind the scenes of editing 'Shin Evangelion Theatrical Version'!

The movie version of #Shin Evangelion, which is being screened with great acclaim, is actually edited by Adobe Premiere Pro.

Introducing an example of Premiere Pro that supported a huge amount of materials and detailed editing https://t.co/sLaEd5OHDJ #Shineva

Anime from this Saturday I'm looking forward to it! pic.twitter.com/T2MTHMqDAV

I've noticed that the ike owl has become an apostle pic.twitter.com/tH8C4wFSjy

It's a scribble that has become fun to anthropomorphize, although I intended to draw a prototype. Pic.twitter.com/iTkZbHcyAZ

A story about a high school girl who came to Tokyo to go to school meets a boy in Tokyo (1/14) pic.twitter.com/lgY41qJMdY

What kind of cover is it www pic.twitter.com/PC6FYH1zZN

Teio is surprised by the crane game
#Uma Musume pic.twitter.com/l8sS2odfbD

While each individual's blog discusses a wide variety of Eva, I find an article that focuses only on Fuyutsuki's strong chest and laughs a lot. It's okay because it's like this pic.twitter.com/IFKBaUKyl3

Cinderella and the witch who succeeded in the presentation. pic.twitter.com/igLFylN1V4

I experimented to see if there was a difference in the number of reactions between 'character only' and 'manga' with the same content pic.twitter.com/EwHto8Qpui

Monthly sales of Uma Musume have exceeded 10 billion, and it feels like an app has been born that has surpassed the high level for the first time in a while. By the way, last year's 'annual sales' of the White Cat Project was 6.8 billion. pic.twitter.com/LaQhHkYJqo

It's been a year since I bought it, and I'm really happy with it, so I'll introduce it without permission. 'Crispy Cube' The stress of dumping garbage has been drastically reduced, and the amount of garbage bags used has also decreased. I was a little dissatisfied with it (honestly I wanted to draw the last page) pic.twitter.com/wUmo03HIE9

It's a drug prevention guy I got from high school, but isn't it too cute? pic.twitter.com/Bj7JuCiKgI

In order to liven up the stamp rally that was scheduled to be held, we will introduce the bulletins created by station employees. This time, it is an original poster created by an employee of Ikebukuro station and a decoration of Ikebukuro. The poster is near the Midori ticket office outside the central 1 ticket gate, and Ikefukuro is on the right after exiting the north ticket gate. pic.twitter.com/DdTM01hyyY

It is a specification that the character will mess with the smartphone if left on the home screen, but it is strange that the collaboration characters Guan Yu and Zhao Yun have a smartphone, so it is announced that they will be confiscated and laughing pic.twitter.com/X8qIjRS4Cg

'Bone is strange' 'There is a mistake in drawing ribs' in the illustration of the head family Shikabanese
Someone has pointed out something like ...
I looked at the materials carefully ...! I'm sorry ...! I thought, so I put more effort into drawing bones than last time. It's embarrassing that the selfish opposition that I hate to lose is on the front, but please compare if you like pic.twitter.com/wRlucweMYz

I drew a manga to propose to the beautiful mom next door. View of marriage (1/3) pic.twitter.com/EhuzcE02y1

#Shineva The music of that scene ...

I tweeted on June 9, 2019, but a few takes before that valuable video

What's amazing is that this is a test run ... in other words, everyone is playing 'first time'.

There are some dangerous sounds, but it's scary that everyone's 'feelings in and out' are perfectly aligned at first sight! !! pic.twitter.com/VC7RBsAKup

The full-length 'BEASTARS' collaboration by Kohei Kadowaki, who also worked on the premiere of the 'Comet' MV at 20:00 on 3/25 (Thursday). The ending of a friendship that is too beautiful is here.
And tonight is the final episode of the anime 'BEASTARS' on Fuji TV. Let's see it and enjoy tomorrow's MV #bstanime https://t.co/bqRicB1XHU pic.twitter.com/eVIOnmcVEx

Souta Fujii's double crown ▲ 4 Ichigin was supposed to be a 'hand that humans can't point to' (Yusuke Toyama) --Individual--Yahoo! News

(PDF file) From 'Tendon Tenya', a spring-only menu recommended for celebrations and holidays will be available from March 25th! Sale of 'Shrimp Shrimp Medetai Tendon' and 'Natural Shrimp Tendon' that you can enjoy a feast-Take-out product 'Spring Holiday Bento' 2 types are also offered-

Beanus | Bean with us. Living beautifully with beans

Released two types of ultra-thin wireless mice with a thickness of 1.8 cm that are convenient to carry. | Sanwa Supply Co., Ltd.