The AI system that controls the fighter F-16 , which is being developed by the US Defense Advanced Research Projects Agency (DARPA), has evolved and added the ability to work with two wingmen.

AI-Controlled F-16s Are Now Working As A Team In DARPA's Virtual Dogfights
https://www.thedrive.com/the-war-zone/39899/darpa-now-has-ai-controlled-f-16s-working-as-a-team-in-virtual-dogfights

Since 2019, DARPA has been promoting a program called 'Air Combat Evolution (ACE) ' that will dramatically advance fighter aircraft with AI. The ultimate goal of the ACE program is to have humans perform tasks that require higher cognitive judgment, such as overall strategy, target prioritization, and weapon selection, and lower cognitive judgment, such as maneuvering during actual engagement. The task that requires is AI, which is the division of labor between humans and AI in air battles.

As of August 2020, just one year and two months after its launch, the ACE program has achieved a feat of 'winning all five races' against veteran pilots.

AI fighter pilot wins a mock combat against a veteran human navy pilot, what is the advantage of AI over humans? --GIGAZINE 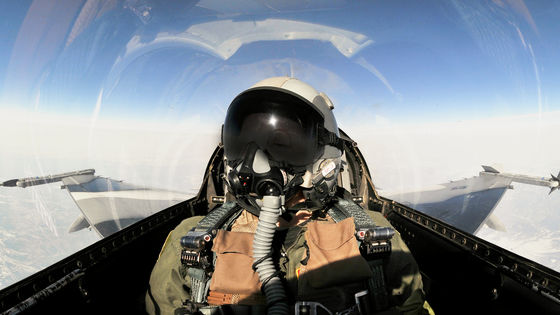 Most recently, he has been mainly working on automation in air-to-air combat, and in the announcement in March 2021, it was revealed that the function of 'cooperating with wingmen' was realized. Below is the official DARPA movie that explains the progress of the ACE program in March 2021. Predicting the movement route of the enemy aircraft and pinching ahead. In another simulation, as shown below, the positioning that allows unilateral strafing while being proactive is secured. In the announcement in March 2021, it was revealed that DARPA is working on 'evaluation of pilot reliability for AI' in addition to the function of linking with such wingmen. As mentioned above, the ACE program is an effort aimed at the division of labor between humans and AI, but in order to achieve a complete division of labor, the human side must be able to trust that 'AI is enough to save lives.' In order to evaluate such reliability, the ACE program is trying to quantitatively measure human confidence in AI by attaching various sensors that measure the physiological response of pilots to L-29 that introduced AI control. That thing.

As of March 2021, the ACE program was evaluated as being in the middle of Phase 1, and DARPA plans to complete Phase 1 with the 'transition from simulated flight test to real-world flight test' to be achieved in the second half of 2021. is.