Yumiko Sato , a certified music therapist in the United States, claims on the news site SLATE .

Non-English editions of Wikipedia have a misinformation problem.
https://slate.com/technology/2021/03/japanese-wikipedia-misinformation-non-english-editions.html

As of September 23, 2020, the Japanese version of Wikipedia page about 'Unit 731' that existed in the Japanese army during World War II has many citations and explanations about human experimentation conducted by Unit 731. It was listed. Mr. Sato said, 'It is clear from many documents that human experimentation was actually conducted in Unit 731,' and blamed the current situation described as 'theory.' Also, on the ' 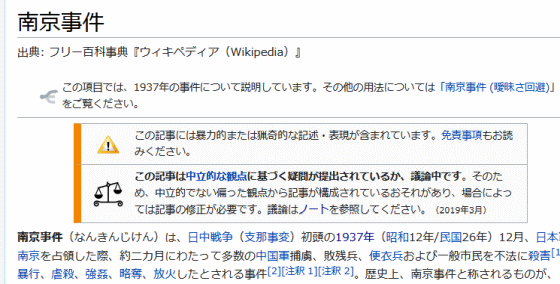 article in January 2021 that evaluated Wikipedia as 'potentially the most secure place on the Internet.' However, Mr. Sato pointed out that this evaluation is an evaluation in the English Wikipedia edited and viewed by people all over the world. Since Wikipedia other than the English version, including the Japanese version, is edited and viewed by people living in specific countries, it claims that the above-mentioned biased opinions may be posted.