Intel has announced that it will collaborate with Microsoft as part of the DARPA (Defense Advanced Research Projects Agency) program aimed at developing hardware and software to improve the computational performance of fully homomorphic encryption (FHE).

Intel to Collaborate with Microsoft on DARPA Program | Intel Newsroom 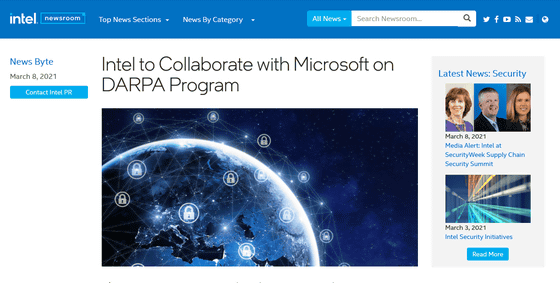 Intel to Build Silicon for Fully Homomorphic Encryption: This is Important
https://www.anandtech.com/show/16533/intel-microsoft-darpa-to-build-silicon-for-fully-homomorphic-encryption-this-is-important

If you normally encrypt your data, you will need to decrypt it every time you perform a calculation or analysis. When you put the data on an external server etc., it will be encrypted for security, but when calculating, it will be necessary for the client to download and decrypt the data, which will increase the load and also the network bandwidth. You will be asked.

'Full homomorphic encryption' is an encryption method that allows the data to be calculated while it is encrypted, and the client only has to acquire the calculated encrypted data and decrypt it. The concept has existed for about 20 years, and there are libraries and toolkits by IBM and Microsoft.

What is the best encryption method for cloud services? --'Homomorphic encryption' that calculates while encrypted: Encryption technology theory in the cloud era (4) (1/2 page)[email protected]
https://www.atmarkit.co.jp/ait/articles/1508/14/news001.html

However, there is a problem in terms of performance, and the current situation is that the adoption of fully homomorphic encryption in the industry is not so widespread.

According to DARPA, the reason for the limited adoption of fully homomorphic encryption is that each calculation produces a certain amount of noise that destroys the encrypted data, reaching the point where there is accumulated noise. , It is said that the original plaintext cannot be restored.

To overcome these points, DARPA is working on the 'DARPA DPRIVE' program, which develops accelerators for fully homomorphic encryption, and Intel has joined the program.