What are the characteristics of self-portrait photos posted on dating apps by men and women who want to be popular? 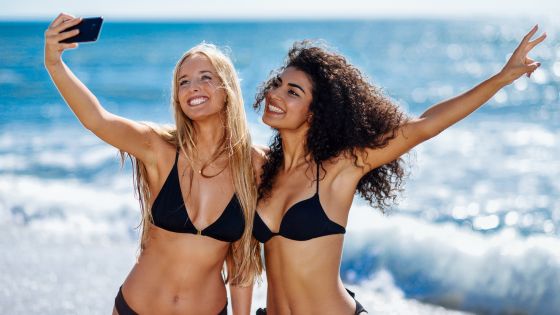 With the spread of smartphones, it has become easier to take high-quality photos at any time, so we often see selfies on SNS and other media. Research results have reported that the tendency of

shooting angles differs depending on the gender and the type of SNS posted.

Nonverbal communication in selfies posted on Instagram: Another look at the effect of gender on vertical camera angle
https://journals.plos.org/plosone/article?id=10.1371/journal.pone.0238588 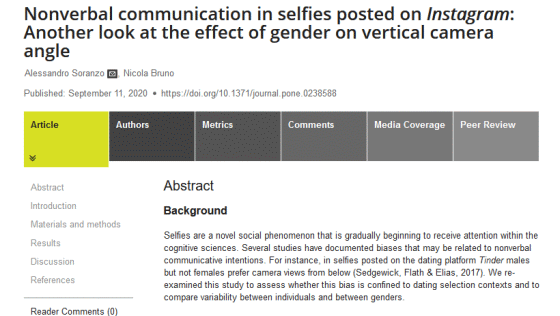 Why is there a difference between male and female selfies? --GIGAZINE 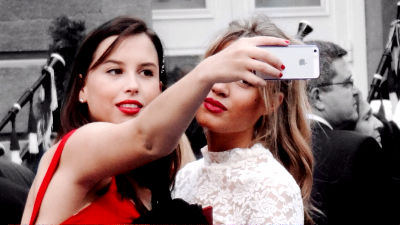 Alessandro Solanzo , an associate professor of psychology at Sheffield Hallam University in the United Kingdom, said, 'Music artists are known to use photographs that appeal to their left cheeks on their jackets to make the album look attractive. In recent years, a similar trend has been seen in self-portraits of the general public. I was wondering if this trend was conscious or unconscious. ' He talked about the SNS for posting self-portrait photos and the motive for investigating the difference in angles depending on gender.

Solanzo's research team collects 10 selfies from 100 male and 100 Instagram users. A total of 2000 self-portraits were classified according to the angle at which they were taken (top, front, bottom), and the ratio of each was calculated. In addition, we analyzed the difference in angle depending on the type of SNS by comparing it with the data on the angle of the selfie photo posted on the dating app 'Tinder ' that was revealed in the past research.

The result of the analysis looks like this. The horizontal axis shows the angles from above, frontal, and below, and the vertical axis shows the ratio of each angle. Also, the red bar is the result for women and the blue bar is the result for men. Looking at the Instagram results shown in the graph on the left, we can see that women are more likely to take selfies from above angles and men are more likely to take frontal angles. On the other hand, if you look at the results on Tinder shown in the graph on the right, you can see that both men and women have the highest proportion of angles from the front, and men have a large proportion of angles from below. 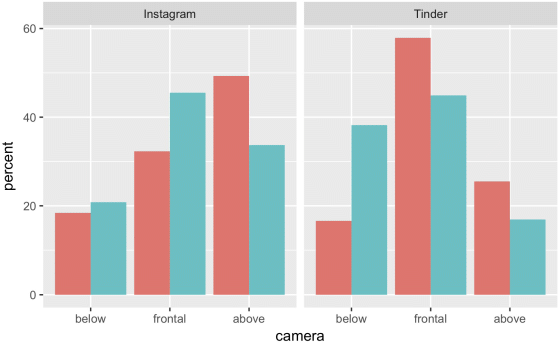 Solanzo commented on this result: 'Generally, when taking a selfie, it looks better if you take a selfie from the top left angle. A man who posts a selfie taken from the bottom angle on a dating site. It is thought that the reason why there were many was to show that they were 'tall and confident'. Also, the fact that many women posted self-portraits taken from the front is the sex of women. This is probably the result of reflecting social norms that curb sexual exploitation. '

In addition, Mr. Solanzo said, 'The most interesting point is,'Is the selection of the shooting angle made consciously or unconsciously?' The spread of smartphones has increased the opportunities for selfies and society. Given the growing potential interest as a phenomenon, there is no doubt that interest in the cognitive-scientific approach to selfies will increase, 'he said. ..