What is the classic American graffiti 'Kilroy Wasp'? ' Kilroy Was Here ' is an American classic graffiti drawn with a character with a long nose hanging from the other side of the wall. ThoughtCo.com , a culturally-themed website, explains the history of 'Kilroy Wasp'.

The Story Behind the Phrase 'Kilroy Was Here'
https://www.thoughtco.com/killroy-was-here-4152093

' Kilroy Wasp' is an American classic graffiti that has been painted on bridge railings, school cafeterias, shared bathrooms, even warship holds and missile shells. When I thought I went to the moon for the first time, the graffiti of 'Kilroy Wasp' was already drawn. '

According to ThoughtCo.com, 'Kilroy Wasp' has been popular in Australia and the United Kingdom before the United States. The Australian version was a graffiti only for the character with a long nose hanging from the other side of the wall, but the British version is 'Wot, no ~~?' In addition to the character. It is said that there is a history that 'Kilroy visit' can be called such ' meme DNA'.

It is said that 'Kilroy Wasp' became popular in the United States around World War II. There are various theories as to who this 'Kilroy' is, but the warship built at the Fore River Shipyard in Massachusetts had 'Kilroy Wasp' drawn to a position that could not be noted unless it was under construction. Therefore, the theory that Mr. John J. Kilroy, a welding inspector who worked at the shipyard, is 'Kilroy' is influential. 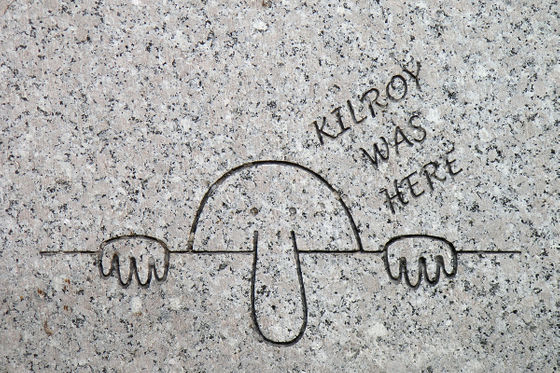 There is also an anecdote about Joseph Stalin and Adolf Hitler, the leaders of the Soviet Union and Nazi Germany, who were hostile to the United States in 'Kilroy Wasp'. According to this anecdote, Stalin saw the 'Kilroy Wasp' on the toilet during the Potsdam Conference and said, 'Who is Kilroy?', And Hitler was the American armament recovered by the German army. It is said that he believed that 'Kilroy was a superhuman spy who could enter anywhere' because many of them had 'Kilroy Wasp' drawn on it.