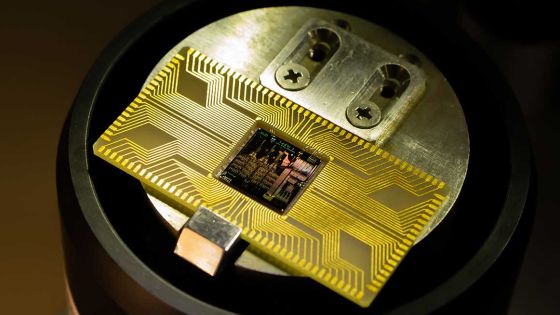 The performance of microprocessors such as

CPUs and GPUs is improving year by year, but at the same time, power consumption tends to increase. The total power consumed by data centers around the world will reach 2% of the world's power by 2020 and is projected to increase to 8% by 2030, thus saving power for microprocessors. The conversion has become a big issue. Meanwhile, a Japanese research team has succeeded in developing a superconducting microprocessor that operates with 80 times the power efficiency of conventional CPUs. Yokohama National University research group has the resistance to cool a specific metal to very low temperatures becomes zero superconducting By using, operable low energy small energy logic ' adiabatic flux quantum Parametron ( I worked on the design of a superconducting microprocessor using ' AQFP) circuit '. As a result, it has announced that it has succeeded in developing the ' Monolithic Adiabatic iNtegration Architecture (MANA) ' superconducting microprocessor equipped with more than 10,000 AQFP circuits.

According to Christopher Ayala, an associate professor at the Institute of Advanced Sciences, Yokohama National University, who is a member of the research team, the operating frequency of general superconductor devices is several hundred GHz, while MANA is up to about 10 GHz. It will work. In this research, MANA operated at 2.5GHz, which is equivalent to a general CPU, but as the design method and experimental method improve, it will be able to operate at 5-10GHz.

Since MANA is designed using superconductors, it will not operate unless it is cooled to 4.2K (about minus 269 ° C). The research team succeeded in operating MANA by attaching MANA to the tip of a custom-made cable and connecting it to a liquid helium cylinder as shown in the image below. 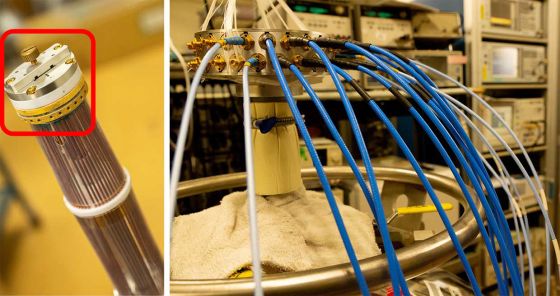 As mentioned above, in order for MANA to operate, it is necessary to maintain a very low temperature of about minus 269 ° C, but even if the energy required for cooling is taken into account, it is compared with the 7nm processor currently on the market. It operates 80 times more energy efficiently, Ayala said.

In addition, IEEE Spectrum, the journal of the Institute of Electrical and Electronics Engineers (IEEE) , points out that MANA requires a cooling system with liquid helium, so it is suitable for large-scale computing environments such as data centers and supercomputers. doing.

Mr. Ayala said, 'There are still many areas in MANA that have room for improvement, such as clock networks and latency, and our research team is continuing research to improve these areas,' he said. He talked about his motivation.