What was the most used password in 2020? In addition to regulars, new faces also appear An analysis of 275,699,516 passwords leaked in 2020 due to a data breach has released the 2020 'Most Used Passwords' ranking. The first place is '123456', which has been ranked at the top in various surveys, but new passwords that have never been seen before have also appeared.

Most common passwords of 2020 | NordPass
https://nordpass.com/most-common-passwords-list/ 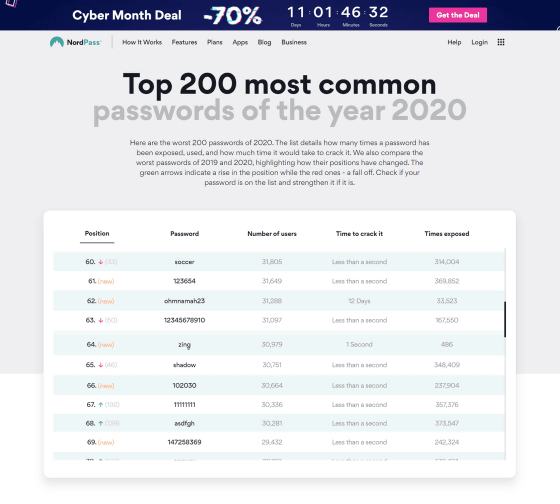 The worst passwords of 2020 show we are just as lazy about security as ever | ZDNet
https://www.zdnet.com/article/the-worst-passwords-of-2020-show-we-are-as-lazy-about-security-as-ever/

The top 20 'most used passwords' in 2020 announced by NordPass , the developer of password managers, are:

Of the top 20 places, 'picture1', 'senha', 'Million2', 'aaron431', and 'qqww1122' are the passwords that first appeared in the ranking. According to NordPass, passwords like the one above are easy to guess, and many are broken in a second or two when an attacker attempts to use personal information in a brute force attack . Of the passwords that appeared, 'picture1', 'Million2' and 'aaron431' took 3 hours to break through, and 'qqww1122' took 52 minutes to break through, NordPass wrote.

About 44% of the leaked passwords are 'unique'. NordPass ranks up to 200th, but even if you list 200 popular passwords, there are no passwords that are difficult to crack.

NordPass recommends the following password creation methods to prevent your personal information from being stolen using a password that is easy to guess.

・ Do not use repeated characters such as 'aaaa' and '123abc'
· Do not choose passwords based on completely non-confidential personal information such as phone numbers, dates of birth, names, etc.
・ Do not reuse passwords for multiple accounts
・ Password must be 12 characters or more
・ Mix uppercase letters, lowercase letters, numbers, and symbols
・ Reset the password every 90 days