Japanese manga and anime are banned in Australia This problem was reported by J-List, a retailer who imports cosplay goods, figures, manga, etc. from Japan and sells them in Australia. According to J-List, various adult products such as adult animations and videos imported from Japan, undressable figures, masturbators , and adult doujinshi have been suspended at customs and returned to Japan.

This new measure for Japanese adult products is that Japanese adult products are now judged to be in conflict with the rules set by the Australian Customs and Border Protection for products that can be brought into the country. It is believed to be the cause. The rules include 'child pornography is illegal,' 'sex, substance abuse, drug addiction, crime, atrocities, violence, and terrorist acts, and violate the moral norms accepted by the general adult. Publications, movies, PC games, and other goods that cause discomfort are illegal. '

Regarding this rule, there is a penalty that 'in addition to the confiscation of the product, fines, prosecutions, and property penalties may be imposed', so there is a possibility that J-List, whose adult goods have been suspended this time, will be fined. There is also.

List of items you can and can't bring in
https://www.abf.gov.au/entering-and-leaving-australia/can-you-bring-it-in/list-of-items 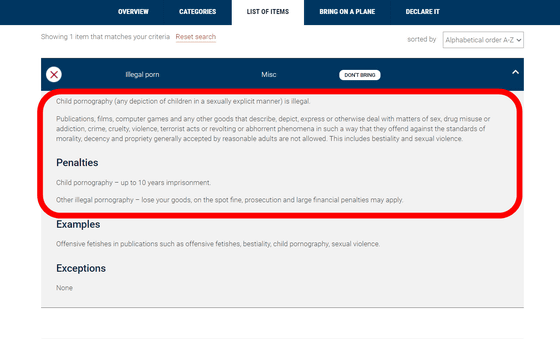 Prior to the tightening of regulations, two South Australian lawmakers said in February 2020, 'Manga and movies sold in Australia describe child rape, incest, sexual abuse, and sexual exploitation. 'There is something that is included,' he requested a review of the classification rules for these works. In Australia, there have also been convictions for the simple possession of 2D images. In 2015, as a man of 52-year-old Adelaide City was in possession of 300 sheets two-dimensional image that is classified as child pornography, the probation disposal of imprisonment four-month suspended sentence with a sentence and 12 months have been sentenced I will .

VICE, the news media that reported this incident, asked the Australian Customs and Border Protection for comment, but said that no response was obtained by the time the article was published.