There are many people who wanted to eat McFleury and soft twist at McDonald's, but when they went to the store, the ice cream machine was out of order and they couldn't order. To eliminate such a tragedy, engineer Rashiq Zahid has developed a web service called ' mcbroken ' that allows you to check 'whether a store's ice cream machine is out of order' in real time.

Meet the 24-year-old who's tracking every broken McDonald's ice-cream machine in the US --The Verge
https://www.theverge.com/2020/10/22/21529477/mcdonalds-mcbroken-bot-ice-cream-machines-app-engineering

It's rare that you couldn't order a hamburger because of a mechanical failure when you went to McDonald's, but there are many cases where you can't order a McFleury or Soft Twist due to an ice cream machine failure. Consumers have been complaining about the issue for many years, with the article 'Why is McDonald's ice cream machine always out of order?' In some cases, the machine is not out of order and cannot be used because it is being cleaned.

Software engineer Zahid was also one of the sad people when he visited McDonald's in Germany because he couldn't order ice cream. So Zahid thought, 'I must be able to do something related to this,' and started developing a system to check if the ice cream machine is out of order before going to the store.

First, Zahid turned to McDonald's mobile apps. With the mobile app, you can place orders with McDonald's around the world, add items to your cart and make payments when you're ready. However, if the ice cream machine in the selected store is out of order, the products that use ice cream will display 'Currently unavailable' and cannot be added to the cart. 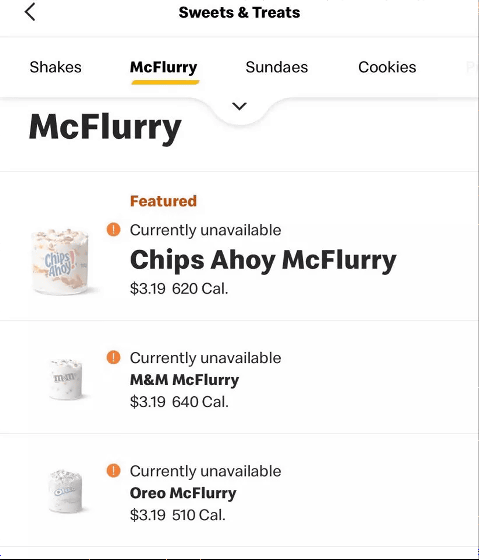 'I love to skim through the various apps and see the security features and internal APIs,' said Zahid, who thought that this mechanism could be used to develop a system to detect ice cream machine failures. .. Mr. Zahid First, he said that he created an 'API that adds ice cream to the cart every minute at every McDonald's store on the mobile app'. However, this did not work because the app recognized it as a bot and blocked it.

When Zahid tested the developed system in Germany, he went to a store where 'ice cream is out of order' on the system and confirmed that he could not order ice cream. Finally, on October 22, 2020, we released a web service called 'mcbroken' in the United States, the home of McDonald's. Due to the large amount of McDonald's in the United States, the API is adding $ 18,752 worth of ice cream per minute to the cart, Zahid said.

I reverse engineered mcdonald's internal api and I'm currently placing an order worth $ 18,752 every minute at every mcdonald's in the US to figure out which locations have a broken ice cream machine

At mcbroken, you can check all McDonald's in the United States, stores with ice cream machines working are shown in green, and stores that are out of order are shown in red.

Zahid said he developed mcbroken as a joke, but he said he was surprised that people recognized mcbroken as a 'useful tool'. Only 20 minutes after the release, 10,000 users visited, so mcbroken running on a server for $ 5 a month (about 520 yen) crashed. After that, Zahid troubleshoots for about an hour and is working fine at the time of writing the article.

Since Zahid created the mcbroken without permission from McDonald's, it is unclear what action McDonald's will take against mcbroken in the future. But David Tovar, vice president of communications at McDonald's in the United States, said, 'Only true McDonald's fans can do this to help consumers get delicious ice cream! So thank you! 'And expressed support for mcbroken.

Only a true @McDonalds fan would go to these lengths to help customers get our delicious ice cream! So, thanks! We know we have some opportunities to consistently satisfy even more customers with sweet treats and we will.