'Nitrous oxide', which has a greenhouse effect 300 times higher than carbon dioxide, is jeopardizing the future of the earth. 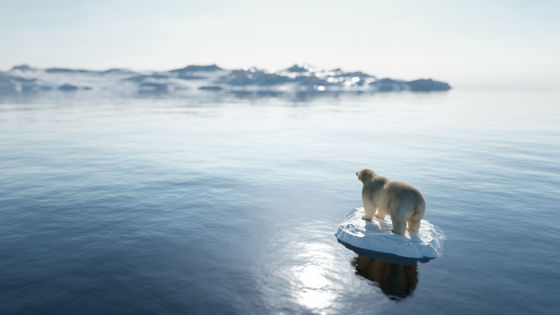 In 2020, the effects of global warming have become apparent in recent years, as it was reported that

January , May, and September were 'the hottest months in the history of observation.' When talking about such global warming, carbon dioxide (CO 2 ) is the focus of attention, but nitrous oxide (N 2 O), which has a greenhouse effect 300 times stronger than CO 2 , is also jeopardizing the future of the earth. The joint research was announced by prominent climatologists such as Pep Canadel, Secretary-General of the Australian Federal Institute for Scientific and Industrial Research .

N 2 O is a gas that, when released into the Earth's atmosphere, is decomposed by ultraviolet rays to produce nitric oxide, which destroys the ozone layer. In addition, the greenhouse effect is there is also a 300 times that of CO 2, since the concentration in it and the atmosphere is short 116 years and the residual period compared to CO 2 continue to remain thousands of years is low in the atmosphere, the greenhouse effect In the global warming potential that determines the strength, it is ranked third after CO 2 and methane.

Canadel Secretary General, et al. Joint research team of 70 people meteorologist than 44 institutions around the world took part, conducted a survey for the total emissions of N 2 O by mankind, N 2 O emissions increased by 30 percent over the past 40 years I found out what I did. The graph below shows the change in N 2 O concentration in the air. It is an estimate derived from a gas trapped in an Antarctic icecap called the Law Dome , as there are no records prior to 1980. It is shown that the concentration, which has not changed significantly since 200 AD, suddenly increased from the mid-1800s. The N 2 O concentration as of 2018 is said to have increased by 22% compared to around 1750. 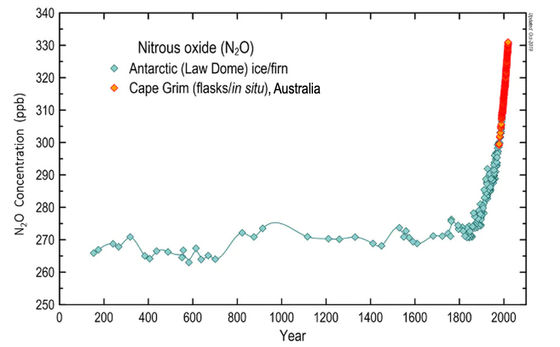 According to a survey by the joint research team, the amount of NO 2 naturally released from soil and the ocean has hardly changed. The joint research team cites agriculture and livestock as the main causes of the sharp rise in N 2 O concentration. In addition to the rapid increase in N 2 O due to the use of nitrogen fertilizer in agriculture and the production of compost from livestock, various human activities such as the chemical industry, wastewater, and burning of fossil fuels also have N 2 O concentrations. It seems to be related to the rise.

The research team is also looking at the rate of change in N 2 O concentration by region. According to the survey, countries with rapid economic growth such as Brazil, China, and India have seen a particularly remarkable increase in N 2 O emissions due to the rapid increase in crop production and livestock population. 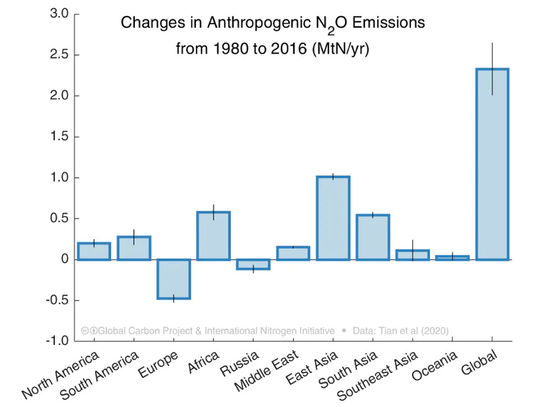 Regarding the ever-increasing N 2 O concentration, the joint research team points out that there is a problem that 'there is no regulation'. Defining the regulations for substances that may destroy the ozone layer

Montreal Protocol in, the air conditioners and refrigerators refrigerant, chlorofluorocarbon and halon has been used, for example, cleaning of electronic components, such as hydrochlorofluorocarbon flon of and dry cleaning Although carbon tetrachloride, which was used as a solvent and refrigerant, was regulated, there is no regulation regarding N 2 O. The Paris Agreement sets CO 2 and N 2 O reduction targets, but these are just targets and are not binding.

The research team argued that current N 2 O concentrations are increasing faster than expected, and that N 2 O should also be noted when discussing efforts to reduce greenhouse gas emissions. As specific measures, regarding agriculture and livestock, which are the main factors for the rapid increase in N 2 O concentration, 'strengthen management of compost from livestock,' 'use plant-optimized fertilizer,' and 'use fertilizer.' In order to reduce the amount, the methods such as ' rotate crops that improve the soil such as legumes' and 'use fertilizer with low N 2 O emissions' are mentioned. The joint research team notes that synthetic fertilizers and compost are currently essential, even with appropriate agricultural policies, and that new technologies are needed to reduce real greenhouse gas emissions to zero.