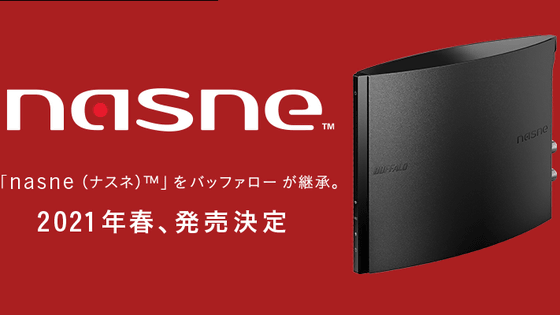 Buffalo, a PC peripheral manufacturer, inherited the network recorder & media storage terminal `` nasne '' that appeared in 2012 as a network recorder that can be used by connecting to PlayStation etc. and finished shipping in 2019, and will be released again in the spring of 2021 It was announced that it will be done.

Crispy and fun with your smartphone. 'Nasne ™' | About Sony Store | Sony
https://www.sony.jp/store/special/nasne/sp/

nasne is a network recorder that allows you to make program reservations and watch recorded programs on PlayStation 4, smartphones, tablets, etc. by connecting to your home network.

Originally Sony Computer Entertainment (SCE, now Sony Interactive Entertainment:
SIE) was on sale, but this time it was announced that Buffalo will inherit it.

Buffalo will take over and release 'nasne ™', which was released by Sony Interactive Entertainment and was discontinued in 2019, in the spring of 2021 with the cooperation of SIE.
Click here for details ↓ Scheduled to be released https://t.co/VvtGzduSVe

Regarding the succession, Mr. Hideaki Nishino, General Manager of Platform Planning & Management Division of SIE, made the following comments.

We are very pleased to announce that Buffalo, a professional storage and NAS product, has released the hardware that supports the torne online service and torne application that many users are using. The nasne to be released this time will be commercialized by Buffalo by making use of the knowledge we have cultivated, and we expect that it will be able to meet the additional purchases and replacement needs of nasne users.

In addition, it is unknown whether or not it will support PS5, as it is said that the compatible model of torne, which is an application for using nasne on PS4, smartphones and tablets, is 'currently under consideration'.